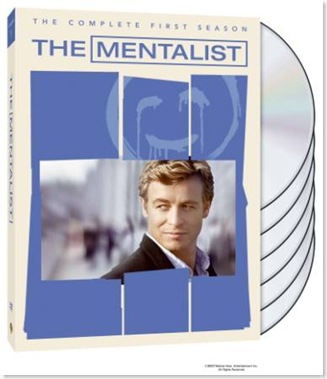 The Mentalist Season One was one of CBS Networks most successful series of the 2008-2009 television season with the pilot episode garnering a 15.6 million rating on its premiere and and 7.8 million for its encore airing three days later. It is also one of CBS’s more quirky and intelligent crime dramas. The Mentalist, created by Bruno Heller, is an adaptation of a premise as old as Sir Arthur Conan Doyle’s Sherlock Holmes: a man with the uncanny mental abilities to notice seemingly insignificant details or the smallest of clues and draw information from them that helps in the process of profiling and capturing criminals.

In this incarnation viewers were presented with Patrick Jane (played by Simon Baker), a man who, up until five years ago, spent his life in the celebrity spotlight as a world-renowned “psychic”. It was then that Jane’s showboating need for the spotlight drew the attention of a cunning and enigmatic serial killer known only as Red John. After being mocked by the “psychic” on a national talk show, Red John retaliated by killing Jane’s wife and daughter. With his world shattered by this ruthless act of revenge, Patrick Jane admitted he feigned being psychic and began using his real abilities as a Mentalist to join the California Bureau of Investigation as a police consultant. While he works on solving other crimes as well in a manner that is found by those around him to be a bit eccentric but highly perceptive, his main drive is his relentless need to capture Red John: something that Jane is willing to sacrifice anything including his own life to do.

The cast of the Mentalist is part of what makes the show work so well and gives the somewhat overused premise a fresh new look and a strong presentation. Patrick Jane is brilliantly played by Simon Baker who has an amazing way of bringing forth all the traits that make this character both grating and endearing. Baker plays the more darkly focused and driven side of Jane as easily as he plays the eccentric, playful and cockily arrogant side. Robin Tunney (Vertical Limit) as Teresa Lisbon and Tim Kang as Kimball Cho bring strength and screen presence to their character who, each in their own way, are an interesting balance to the more cerebral Patrick Jane. The cast also includes Dwain Yeoman and Amanda Righeti ( Friday The 13th).

Another interesting aspect of The Mentalist is the elusiveness of the villain Red John. While he remains unseen, he leaves a mark on the lives of those he chooses to target: that mark being a very creepy looking smiley face drawn using his victim’s blood. It seems to make his crimes against them highly personal and all the more devastating for those left behind. Viewers also get the sense that maybe Red John’s connection to Patrick Jane runs deeper than simply retaliating for being mocked on a talk show by the “psychic” Jane claimed he was. The intrigue is seeing what comes next, where Red John leads the CBI and most of all where he leads The Mentalist who is making it his life’s mission to capture the killer.

The Mentalist: The Complete First Season contains all twenty two episodes of this dynamic and award winning crime drama including the December 2, 2008 episode Flame Red which became the highest-rated television show airing that week which marked the first time a program in its first season had achieved that kind of distinction since Desperate Housewives had achieved that honor four years earlier. It was only the first of the many honors The Mentalist achieved in it’s first season run: honors that included winning the January 7, 2009, People’s Choice for “Favorite New TV Drama” at the 35th People’s Choice Awards. The DVD also has top notch special bonus features

The Mentalist: The Complete First Season is available on DVD through retail marketers or can be purchased online directly through

The second season of The Mentalist, which premiered on September 24th, is currently airing on CBS on Thursday nights at 10PM EST.

Check out the official site for The Mentalist: the Complete First Season to learn more about this exciting hit CBS series.