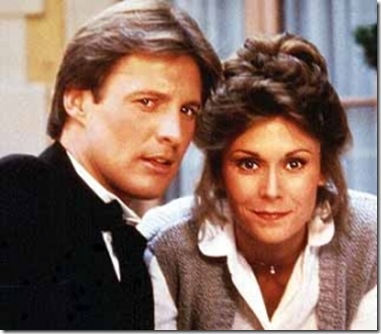 Scarecrow and Mrs. King: The Complete Second Season has all twenty-three episode of season two on one DVD. It was fun to sit down and reacquaint myself with a series I enjoyed back when it was in first run. It was also a little cringe worthy to see some of the more unflattering fashions that were all the rage in the eighties – can you say shoulder pads! Though I have to admit they looked darn good on Kate Jackson. Season two of Scarecrow and Mrs. King also took the pair out of the suburbs and into some foreign intrigue plotlines. It also had some very interesting guest stars in key episodes such as the incomparable Jean Stapleton as Stetson’s dithering  mentor, Lady Emily Farnsworth. Yet, I think what season two of Scarecrow and Mrs. King was most known for was being the season that teased fans and viewers who wanted to see Lee and Amanda finally become a couple.

In an episode titled Ship of Spies, Amanda King becomes Mrs. Lee Stetson on a romantic wedding cruise complete with vows and kissing at the altar. Of course it’s all a ruse for the sake of nabbing the bad guys and yes teasing the fans/viewers of course. Nothing gets ratings going like fans/viewers getting to see their favorites become a couple in a romantic, fairytale wedding.

The episode quality of Scarecrow and Mrs. King: The Complete First Season on DVD is excellent and well worth the trip down memory lane with the series. Or a great opportunity to get to know Amanda King and Lee Stetson and find out why a housewife doesn’t have to desperate to have an exciting life with a handsome man of mystery!

Learn more about Scarecrow and Mrs. King: The Complete Second Season at the official DVD site.