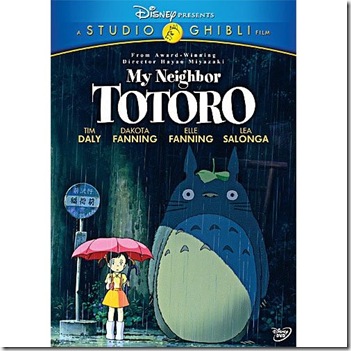 Maybe it’s because Ponyo did four times the box office of any North American release of any previous film by Hayao Miyazaki, maybe it’s because they are just such wonderful films. Whatever the case, Disney DVD has re-issued the director’s Castle in the Air, Kiki’s Delivery Service and My Neighbor Totoro in two-disc special editions with a ton of new bonus features. 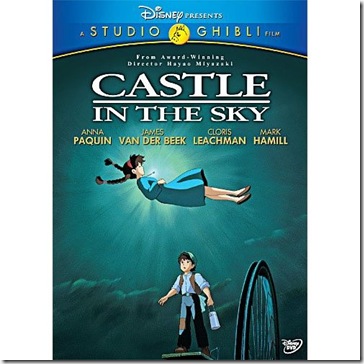 Castle in the Air is the Pazu, an engineer’s apprentice, and Sheeta, the girl he finds floating down from the sky, crying. Somehow, they are involved in finding a mythical, airborne land called Laputa. When they discover that Laputa exists, they also discover that it is up to them to keep Laputan science from falling into the hands of a would-be world conqueror – and learn how the mysterious medallion Sheeta wears in a necklace figures into things.

Miyazaki, whose designs are always imaginative and unique, tells the story in a pretty straightforward manner, introducing likable pirates, easily manipulated military forces and strangely flexible robots – among other things. Castle in the Air looks like nothing you’ve ever seen before which makes it representative of Miyazaki’s masterful filmmaking.

Bonus Features: Disc One: Introduction by Pixar boss John Lasseter; Disc Two: Storyboard Presentation of Castle in the Air; The World of Ghibli: Behind the Studio: The World of Laputa; Creating Castle in the Sky; Character Sketches; Producer’s Perspective: Meeting Miyazaki; Scoring Miyazaki [on all three DVDs]; Original Japanese Trailers; Behind the Microphone [Interviews with the American Voice Cast including: Anna Paquin, Mark Hamill, and Cloris Leachman]; Lithograph; Enter the Lands: Explore the Lands of this and other Miyazaki films.

Grade: Castle in the Sky – A 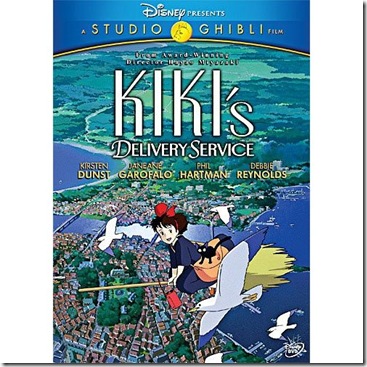 When a witch turns thirteen, she has to go out into the world and hone her skills. On Kiki’s thirteenth birthday, she and her familiar, Jiji [a smart-ass black cat] travel to a faraway city where Kiki first works in a bakery, staying in a room behind the store. As she becomes familiar with the city – and via delivering baked goods for her boss – she decides that she can make a living as a delivery person and starts up her own service. Kiki’s delivery Service is about growing and becoming responsible – but without losing that sense of joy and wonder that rarely survives childhood.

One of the most interesting aspects of the film is that Miyazaki feels no need to introduce a villain and yet the film is filled with more than enough adventure to hold an audience for over an hour and a half.

Bonus Features: Disc One: Introduction by John Lasseter; Disc Two: Storyboard Presentation of Kiki’s Delivery Service; The World of Ghibli: Behind the Studio: Creating Kiki’s Delivery Service; Kiki & Jiji; Flying with Kiki & Beyond; Producer’s Perspective: Collaborating with Miyazaki; The Locations of Kiki [may not play on all machines – it only played on one of mine]; Scoring Miyazaki; Original Japanese Trailers; Behind the Microphone [Interviews with the America Voice Cast including: Kirsten Dunst, Phil Harman and Janeane Garofolo]; Other Ghibli worlds; Lithograph; Enter the Lands. 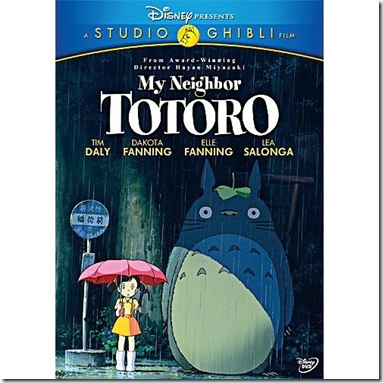 My Neighbor Totoro follows the adventures of sisters Setsuke and Mai as they explore the lands around their new home in the country – not far from the hospital where their mother is recovering from tuberculosis. When four-year old Mai follows a small, fuzzy, semi-transparent creature into the woods, she discovers Totoro – a giant version of the much smaller creature. She shares her discovery and Setsuke and the three become friends.

This film is the most adventurous in terms of Miyazaki’s creature designs. Totoro and his two smaller versions [one a mid-size version] and the catbus [a bus that is, yes, a living cat] are some of his most beloved creations [when word went out that plush Totoro toys were going to be given away to promote My Neighbor Totoro’s first TV broadcast, the station was swamped with truckloads of mail!

Bonus Features: The World of Ghibli: Behind the Studio: Creating My Neighbor Totoro; Creating the characters; The Totoro Experience; Producer’s Perspective: Creating Ghibli; The Locations of Totoro [may no play on all machines]; Scoring Miyazaki; Original Japanese Trailer; Behind the Microphone [Interviews with the American Voice Cast including: Dakota Fanning, Elle Fanning and Tim Daly]; Original Japanese Trailer; Lithograph; Other Ghibli Worlds.

Grade: My Neighbor Totoro – A+