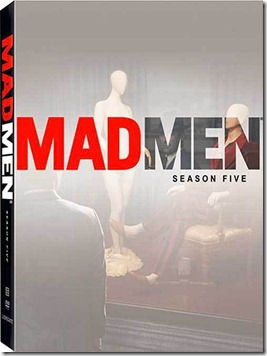 While a lot of companies are stripping their DVDs of bonus material, it is refreshing to see that Mad men, one of the handful of TV’s greatest series ever, is being released in full season DVD sets that give us a ton of features at reasonable prices.

The fifth season of Mad Men seemed to move a bit more slowly than its usual deliberate pacing and didn’t quite light up the critics’ lives as it had in season past, but it still showed that there were lots of layers to peel away from its cast of characters – and a lot of ways to show them.

Don Draper (John Hamm) continued to be one of television’s most haunted characters. His inner search for identity, some semblance of happiness and peace of mind hit some (more) bumps in the road with a new marriage that certainly didn’t go as he wanted, a company that wasn’t the success he’d hoped for, and a family from which he seemed to become more disconnected with every episode.

Indeed, most of Mad Men’s core cast of characters found their lives disintegrating in some way during a season in which only Joan Holloway (Christina Hendricks) seemed to come out ahead (though at a cruel cost). Peggy Olson (Elizabeth Moss) continued her progress as a person and a professional, but her establishing of independence left her life in a kind if in-between state by season’s end. And then there was the departure of Lane Pryce (Jared Harris) in manner that came as a shock in terms of both manner and timing.

Overall, Mad Men still killed it in season five, with very few shows even approaching it for quality. The same high level of quality is reflected in the season’s DVD set, too. There are six featurettes that explore the language of the characters; how the show is scored; an exploration of the life and art of Giorgio de Chiricho – the artist whose work directly influenced the design of the show’s season five promotional poster; the best party of the century, and the history of Daylight Saving Time; and two commentary tracks for almost every episode – twenty-four (!) in all.

Special Features: Mad Men Say The Damnedest Things; What shall I Love If Not The Enigma?; The Party Of The Century; Scoring Mad Men: Inside A Session; The Uniform Time Act Of 1966; Newsweek Magazine Digital Gallery.

The Other Woman: 1) Weiner and Semi Chellas; 2) Moss, Hendricks and Hamm

Commissions And Fees: 1) Weiner and Andre and Marie Jacquemetton; 2) Christopher Manley and Harris

The Phantom: 1) Weiner and Igla; 2) Pare´ and Julia Ormond