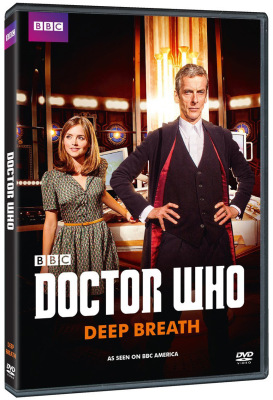 Deep Breath opens with a dinosaur suddenly appearing in the Thames in Victorian London. Being something they don’t know how to handle, the police summon Madame Vastra (Neve Mackintosh), Jenny Flint (Catrin Stewart) and Strax (Dan Starkey) who arrive just in time to see the titanic beast cough up a bright blue box.

Somehow, in trying to evade the dinosaur – and evidently, attempting to figure out that whole flying the TARDIS thing – the TARDIS, along with Doctor Twelve (technically Doctor Fourteen, but who’s counting? The ep even makes fun of that!) and Clara (Jenna Coleman), was swallowed by it and accidentally brought it along when they dematerialized.

Being freshly regenerated, The Doctor is in less than fully command of his new self – though he’s aware enough to call humans ‘pudding brains’ before Vastra, Jenny and Strax cart him off to their home/headquarters where he is appalled at the concept of a whole room for a bed and/or sleeping. We quickly learn that Clara no longer thinks she knows who The Doctor is – leading to an audience with a veiled Mme Vastra that is a potent and hilarious exploration of identity, prejudice and several other things that are not really important now. (And may I just add my voice to those already clamoring for a Paternoster Gang series?)

Meanwhile, The Doctor dashes off, in his nightshirt, to try to help the poor dinosaur which combusts before his eyes – which, in turn, leads to the discovery of the episode’s villain.

This is a Doctor who can’t quite find the word for ‘cold’ – using ‘bitey’ – or tell Clara from Strax. H doesn’t understand why he chose this particular body – he lines, but didn’t do the frowning, and notes that, even so, his face isn’t that bad until it gets to his eyebrows (where it all goes wrong).

Still, even his not-quite-fully-cooked state, he’s quick to note that the real question isn’t how the dinosaur combusted, but whether there have been any similar murders. Then, once he’s in a position to start figuring that out, he finds the situation familiar (hint: The Girl in the Fireplace) but can’t quite put his finger on why.

Capaldi brings a kind of darkness to The Doctor that is both scary and refreshing. This is a Doctor who is glad to be Scottish because that means he can complain; this is a Doctor who can be silly without appearing silly. He has an edge that confounds Clara but not Vastra – who may be a Silurian descendant from pre-history, but she knows her humans, and The Doctor!

This Doctor is expeditious. He may not move in straight lines, but straight lines aren’t always the best way to get from point A to point B, and he knows that. And while he may not yet be comfortable as his new self, he hasn’t forgotten where he came, either – as Clara learns by the end of the episode.

We also learn that The Doctor knows Clara as well as ever – leading to an awkward exchange in what appears to be a restaurant, and a bit of sympathy The Doctor extends the nameless villain at one point (‘Five-foot one and crying; you never stood a chance!’).

The direction, by Ben Wheatley (A Field In England) – who also directed the season’s second episode (Into The Dalek) – is fast-paced and muscular, without clipping character beats but makes room for humor of all kinds (physical gags, puns, punchlines, even some brilliant throwaways).

In the end, juxtaposing The Doctor’s most relentlessly weird regeneration with a situation that screams déjà vu turns out the best way to establish his new identity – the same, only different, in a way that allows Capaldi to firmly put his stamp on the role.

Extras include a prequel scene seen only in theaters (a Sontaran look at the history of Doctor Who); the thirty-minute special that introduced Capaldi as the new Doctor, the premiere episode of Doctor Who Extra (behind the scenes of Deep Breath) and the fourth part of the BBC’s Real History of Science-Fiction: Time Travel. An audio commentary would have been nice, but maybe on the season eight home video release.

Grade: Doctor Who: Deep Breath A-