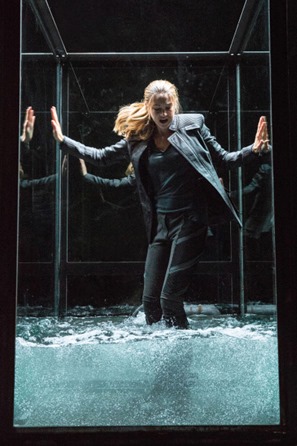 Divergent is the latest in a series of adaptations of dystopic YA novels. Most have flamed out spectacularly, but this Neil Burger-helmed entry hopes to beat the odds by tackling the opening of a critically well received and extremely popular book that has fans that are as passionate as those of the hugely successful Hunger Games books/movies. Like The Hunger Games, Divergent has a great cast – spearheaded by an extremely committed Shailene Woodley as the lead, Tris Prior.

Divergent is set is a post-apocalyptic Chicago that has been partially rebuilt and sealed off from the rest of the world by a huge wall. Its populace is separated into five factions: Abegnation, the selfless – who run the government and see to the city’s welfare; Amity, the peaceful – they run the farms that produce the city’s food; Candor, the honest – they run the legal system; Dauntless, the brave – a warrior faction, they provide the city’s policing and defense; and Erudite, the intelligentsia – they are the scientists and beacons of knowledge. There is a sixth group composed of those who do not fit neatly into any faction, suitably dubbed the Factionless.

Then there are the Divergent – those who exhibit the attributes of more than one faction.

At their sixteenth birthday, every citizen is aptitude tested to determine which faction they should belong to, but they can choose a different faction if they wish – once the choice is made, however, they can’t go back. Choosing a different faction means giving up your family – ‘Faction over blood.’

When Beatrice Prior (Woodley) is tested – by means of a series of induced hallucinations which the examiner can watch – she exhibits traits of three factions, making her Divergent. Her examiner (Maggie Q) warns her that she must tell no one. The following day, when she has to choose her faction, she chooses Dauntless. She also chooses to be known as Tris. 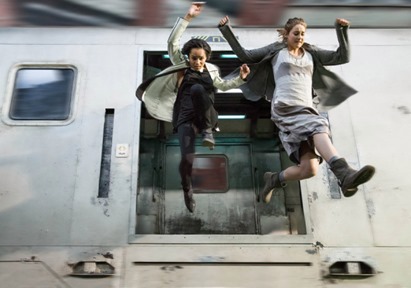 Unexpectedly, the new members of Dauntless learn they must earn their place through an initiation consisting of three stages: weaponry and hand-to-hand combat; mental discipline through a series of hallucinated scenarios very like the aptitude test we saw earlier, and finally, facing their worst fears in one massive hallucinatory sequence that is witnessed by the leaders of all the factions.

Four (Theo James) is the weaponry and combat instructor – and Tris’ supervisor through the second stage of initiation – and the two develop feelings as she struggles to stay above the cut-off point that leave her Factionless. Other major players in Dauntless include Eric (Jai Courtney), one of the leaders; Peter (Miles Teller), another initiate who takes a dislike to Tris and does his best to ‘dissuade’ her from continuing; Will (Ben Lloyd-Hughes) another initiate who, with Christina (Zoe Kravitz) befriends Tris.

Kate Winslet is the ambitious Jeanine Matthews, leader of the Erudite, who schemes to have her faction replace Abegnation as the city’s government. Her plan involves a method of bending others to her will (better living through chemistry) and having Dauntless execute Abegnation. She’s a sweetheart and Winslet plays her with evil aplomb.

Divergent sets up this world and Tris’ situation in more detail than perhaps is necessary, but gooses the proceedings with action just about every time it hovers near the tedious – another critic at the screening I attended wailed ‘Where’s the danger?’ and seconds later, the longest zip line in history fans of the books will know what I mean, and everyone else will love the surprise. 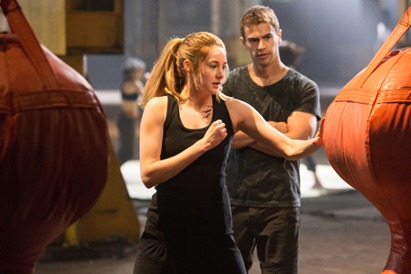 Divergent was written by Evan Daugherty and Vanessa Taylor, from the novel by Veronica Roth. I don’t know if fans of the book will have picked up the many influences that come across more clearly in the movie. There are hints of Invasion of the Body Snatchers, Logan’s Run and 1984, among others, but by and large, the film holds up as an entity in and of itself.

At two hours and twenty minutes, it’s likely going to seem a bit too long for those who haven’t read the book, but not long enough to include everything fans loved from it. Like the first Hunger Games movie, Divergent overcomes the amount of exposition required to set up a trilogy or quadrilogy with a cast that believes in it and commits on a deep level. It is helped by some terrific if unlovely CG (as befits a dystopic setting) and blocky settings that project the feeling of a place that could fall apart at any moment.

Between the writers and director Burger, Divergent is never allowed to get boring – there’s always something that happens at just the right moment to jolt, or reinvigorate interest. The scenes with members of Dauntless jumping onto moving trains (suitably aged and rickety looking) and leaping off them at their destination are great fun – and the zip line gag is all kinds of awesome.

Woodley perfectly captures Tris’ willingness to not let her uncertainty or fear rule her – her hesitation time diminishes with every new challenge. James projects a fierceness that is (just slightly) undercut by compassion – a trait for which Dauntless is not known. Their chemistry is pretty solid, too.

Personally, I enjoyed seeing Teller play a humorless bully. It reminds us that he’s not just the coming-of-age/party movie guy. And Jai Courtney is better here than in virtually everything else he’s done – Eric is harder-edged than Four, but there are glimmers of intelligence and concern behind his eyes.

Sure, Divergent could have been pared down a bit, but overall, it’s a satisfactory beginning to a series – and one that just might make it to a (deserved) sequel.