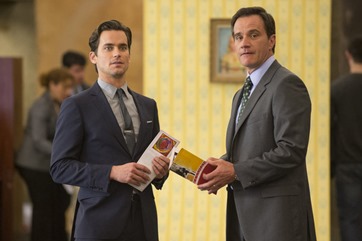 USA Network has given slick white collar crime dramedy White Collar an abbreviated, six-episode sixth season – something that suggests it will be that show’s finale (sibling network Syfy has done something similar with Eureka and Warehouse 13…).

The network has also taken pilots for Rush – a drama about a Hollywood concierge doctor, and Complications – Matt Nix’s drama about a disillusioned ER doctor. By adding these series, and renewing White Collar (for however limited a run), USA Network will enter its 2014-15 season with six new shows and six returnees, creating more hours of original programming that it ever has.

For more details about the new shows, check out the press release following the jump.

UNIVERSAL CITY, Calif. – March 21, 2014 – USA Network announced today that it has picked up FOX 21’s RUSH, written and produced by Jonathan Levine (“Warm Bodies”) and Fox Television Studios’ COMPLICATIONS, from creator and executive producer Matt Nix (BURN NOTICE) to series.  Both of the dramas are slated for 10-episode runs, including the pilots.  The network also announced that it has renewed fan-favorite WHITE COLLAR for a sixth season.  The series, from creator and executive producer Jeff Eastin (GRACELAND), has been picked up for six new episodes.

The announcement comes on the heels of two recent drama pick-ups for the network.  This summer, USA will launch the Untitled Sean Jablonksi series starring Matt Passmore ("The Glades"). In late 2014, the network will also premiere the event series "Dig," starring Jason Isaacs ("Awake") and Anne Heche ("Save Me"), from creators Tim Kring ("Heroes") and Gideon Raff ("Homeland").

“We are excited to usher in the next generation of USA dramas, alongside our signature returning originals that continue to attract a large and loyal fan base," said Chris McCumber, president of USA Network. "This year USA will be showcasing more hours of original programming than ever before, including an unprecedented 6 new series and 6 returning shows."
RUSH (working title), stars Tom Ellis (“Miranda and Gates”) and is from writer/director Levine (“Warm Bodies,” “The Wackness”) along with Fox 21 and Little Engine’s Gina Matthews and Grant Scharbo (“The Gates,” “Missing”).  It is a fast paced Hollywood drama centered around Dr. William Rush (Ellis).  Rush is not your average on-call doctor, he’s highly discreet no matter what the ailment, as long as the client can pay his cash-only premium, and the doctor can party with the best of them.  He has no desire to change his life or how he lives it, until an old flame and his conscience begin to stir things up.
After wrapping seven seasons of the hit series BURN NOTICE for USA, Nix brings a high-octane drama to the network with the gritty medical series COMPLICATIONS (working title).  The project centers around John Ellis, played by Jason O’Mara  (“Vegas,” “Terra Nova”), a disillusioned suburban ER doctor who finds his existence transformed when he intervenes in a drive-by shooting, saving a young boy’s life and killing one of his attackers.  When Ellis learns the boy is still marked for death, he finds himself compelled to save him at any cost, and discovers that his own life – and his outlook on medicine – may never be the same.

The #1 network in all of basic cable for an unprecedented eight straight years, USA Network is seen in over 102 million U.S. homes.  USA is a leader in scripted programming with a powerful stable of originals, spectacular live television and is home to the best in blockbuster theatrical films, a broad portfolio of acquired series and entertainment events.  A trailblazer in digital innovation and storytelling, USA is defining, driving and setting the industry standard for Social TV.  USA is a program service of NBCUniversal Cable Entertainment, a division of NBCUniversal. The award-winning website is located at http://www.usanetwork.com.