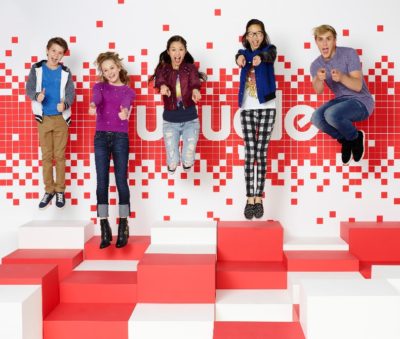 Disney Channel has renewed its hit series, Bizaardvark – which follows best friends Paige and Frankie, who express themselves through funny music videos on their vlog channel, Bizaardvark.

Bizaardvark returns with the second half of season one on Friday, January 13 (6:30/5:30C). Details follow the break.

Disney Channel has ordered a second season of the series “Bizaardvark,” it was announced today by Adam Bonnett, executive vice president, Original Programming, Disney Channels Worldwide. The comedy is about the everyday lives of best friends Paige and Frankie who express their offbeat individuality through funny music videos on their vlog channel, Bizaardvark. Now that their channel is on the Vuuugle Studios social media platform, their lives include their longtime friend Bernie acting as their agent, and their fellow Vuuugle stars Dirk (“Dare Me Bro!”) and Amelia (“Perfect Perfection with Amelia”).

The multi-camera comedy will resume production in the coming months with season two scheduled to roll out in 2017.

Bonnett said, “Our hope is that ‘Bizaardvark’ inspires kids to embrace their own creativity and individuality, and encourages them to express themselves. We’re excited about the direction that executive producer Eric Friedman and the creative team have planned for the new season, which will continue to build on the series’ smart and clever storytelling.”

Since its June premiere, “Bizaardvark” has reached 60 million Total Viewers including 22 million Kids 2-14 and 23 million Adults 18-49. “Bizaardvark” has also generated 5.4 million views via set-top box and video on demand, and 7.2 million engagements via the Disney Channel App for 2016 to-date. On YouTube alone, the series and related short-form programming including music comedy videos have amassed over 15 million views.

The multi-camera series was created by Kyle Stegina and Josh Lehrman, each participants in Disney Channel’s Storytellers program, which fosters and develops the next generation of series creators and writers of programming for kids, tweens and families. Executive produced by Eric Friedman (“Austin & Ally,” “Crash & Bernstein”) and co-executive produced by Michael Curtis & Roger Schulman and Kyle Stegina & Josh Lehrman, “Bizaardvark” is a production of It’s a Laugh Productions, Inc. and carries a TV-G parental guideline.