Okay, kiddies… We’ve got all manner of strangeness for you, today. First up is Quentin Tarantino’s fusion of cars & babes flicks with slasher movies, Death Proof – in it’s extended [by which we mean full] version. Then there’s the new repackaging of the first two Resident Evil movies in what they’re calling the Resurrection Edition. Hey! Zombie dogs! Next we’ve got the original 3:10 To Yuma – a much different version than the recent, excellent film – but just as twisted. Finally, Jim Henson’s first full length feature with only puppets, the amazing The Dark Crystal – in this spiffy 25th Anniversary Edition!

It’s chicks and hot cars! It’s a slasher movie! It’s two! Two! Two movies in one! It’s the full length version of Quentin Tarantino’s half of the Grindhouse experience, Death Proof. Filled with characters whoalltalkthisfastbuthavedisctinctiveidentites, Death Proof is Tarantino’s homage [you like that word?] to exploitation movies of the sixties and seventies.

You get two quartets of hot babes for the price of one – plus Rose McGowan. How can you go wrong with that? Well, for starters, the first quartet dies! That’s right. Why? Because they’re all beautiful, a little vain and weren’t quick enough to provide a lapdance for a deranged former stuntman named, oddly enough, Stuntman Mike [Kurt Russell].

All that hot deejay, Jungle Julia [Sydney Poitier], Butterfly [Vanessa Ferlito], Shanna [Jordan Ladd] and Lanna [Monica Staggs] want to do is party a bit than head out into the country for all-girls weekend. In their last stop before heading out, they run into Stuntman Mike, who asks Butterfly for a lapdance – and whoooeee! We get the whole thing here – unlike that “reel lost” crap we got in the local cineplex.

When the girls [exploitation flick, people] leaves, Stuntman Mike [I love that name!] is asked for a ride by Cherry [Rose McGowan] and we find out why his car id “death proof.” Then he heads off to a bang-up reunion with Butterfly and her posse. He comes out if with a few bruises and broken bones – they come out it dead! With shorn limbs and various gruesomely crushed parts!

The good ol’ boy sheriff [Michael Parks] has a hunch that this was no accident, and it seems like Stuntman Mike decides not to press his luck. His next “rendezvous” is with the second quarter of girls, several states away: stuntwomen Zoë Bell [Zoë Bell] and Kim [Tracie Thoms, and actors Abernathy [Rosario Dawson] and Lee [Mary Elizabeth Winstead]. This time things don’t go so well for ol’ Stuntman Mike.

Death Proof is typical Tarantino – fast-paced, funny, quirky and just a teensy bit over the top [no, really?]. The cast is hot – even Russell, whose pompadour is a character of its own. Who else woulda thought up a serial killer whose weapon was a car? I could tell you the script’s great; the editing amazing, and the cast is to die for – but what matters is Death Proof is a hella ride!

Features? We don’t need no stinkin’ features! But we got some dandy ones: Disc One: Trailer and Poster Galleries; Disc Two: Stunts on Wheels: The Legendary Drivers of Death Proof; Kurt Russell as Stuntman Mike; Finding Quentin’s Gals [see!!!]; The Guys of Death Proof; Introducing Zoë Bell; Quentin’s Greatest Collaborator: Sally Menke, and Double Dare [doc on Zoë Bell] Trailer. No commentary. Pfui! And, hey! Where are those fake trailers, eh, Quentin?

Written and directed by Paul W.S. Anderson [the genius behind Alien vs. Predator], the first RE movie was something less than excellent. The plot – about a virus getting loose in an underground Umbrella Corp. lab and killing its employees – before bringing them back – was pretty basic. But hey! Zombie dogs, eh? That was cool.

Milla Jovovich played Alice, memory blocked security chief for UC who, lost her memory [amnesia? again?] and stumbled onto the situation. Discovering nifty abilities as she goes [how the #$@! did I do that? she seems to be thinking for most of the movie]. Alice almost manages to get things under control, but UC screws everything up and the contagion spreads into Raccoon City. Don’tcha just love it when a plan falls apart?

In RE2 – Apocalypse, the UC tries to limit the contagion to Raccoon city and – big surprise – fails! On the other hand… zombie dogs! And some new playmates for Alice [including a Lara Croft look-alike, Jill Valentine, played by Sienna Guillory]. We also meet the big villain, Dr. Isaacs [Iain Glen] who survives to try to take over the world another day.

Zombie dogs. Gotta love ’em. Otherwise, RE/RE: Apocalypse? Not so much. Anderson’s strength as a writer is that he has ideas. His weakness is that they’re bad ideas [except for… you guessed it!]. He must be persuasive, too. Oded Fehr [Carlos], Carlos and Thomas Kretchmann [Major Cain] signed up for this one [maybe they needed a mortgage payment].

Alice gives Jovovich a shot at showing her stuff – she’s got mad skills as an actor and does most of her own stunts. Too bad she’s pretty much it for these movies [her and the zombie dogs]. But hey, the director’s her fiancé – it’s not like she had anyone else asking her to do their action movies [pity, that!].

And did I mention the zombie dogs?

Elmore Leonard’s short story is told with a lot less fuss [and a lot less gunfire!] here. Otherwise, the plot is the same: poor rancher Dan Evans [Van Heflin] signs on to escort vicious train robber Ben Wade [Glenn Ford] to the train station to haul his villainous butt to Yuma – where he’ll be executed. 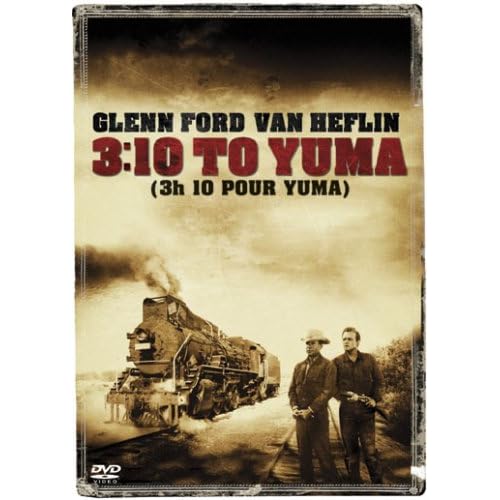 As the trip progresses, the two converse and a grudging respect arises between them. Basically, that’s it – except for the attempt by Wade’s gang to free him, which isn’t nearly as exciting as the new version, but does set up an ending that feels right – if a lot less bloody than the new film. Glenn Ford played a lot of honorable – even heroic – roles in his prime, so Wade marked a radical departure for him. Playing Wade an affable, well read sort, but with no warmth in his eyes, showed that Ford was a versatile kinda guy. Van Heflin’s Evans was a stock character, but Heflin had a habit of making them feel real.

Delmar Daves did a great job of making the most of his low budget and got a small hit [and a minor classic] out of the script by Halsed Welles. Elmore Leonard didn’t like it. Felt it was too talky.

Confession: the Muppets crack me up. Doctor Bunsen Honeydew and his protégé Karbunkel… I mean Beaker, especially. But Dark Crystal isn’t about Muppet frolics and sight gags. Nope. It’s an epic quest fantasy that could be called a puppet Lord of the Rings.

When the world was much younger, there was harmony [yeesh!] and a giant crystal was at least partly responsible. Then the evil Skeksis took things over, cracking a shard out the crystal and things got bad [Sauron bad, to be accurate].

Now, many, many moons later, Jen, a young Gelfling, learns from the wise beings that raised him that it his destiny to find the missing shard and restore the now dark crystal [aha!]. His quest takes him many places – most not so hospitable – and, in his travels, he meets Kira, a young female Gelfing [a very good thing because Jen though he was the last of the Gelflings and now…].

Designed by Brian Froud [amazing, unique British fantasy artist] and cobbled together by Jim Henson’s creature Shop, The Dark Crystal is not a kid’s movie. It is a serious, dramatic and occasionally powerful fantasy. I guarantee you have not seen a world like this in movies before [unless you’ve seen the movie – then, nevermind].

The two-disc anniversary edition features a restored print and cool features. Disc One: an insightful Audio Commentary by Brian Froud [!!!]; Disc Two: The Original Making Of Documentary; Deleted Scenes; Work Print Scenes; Character Drawings; Reflections of The Dark Crystal – Light on the Path of Creation and Shard of Illusion – two new behind-the-scenes documentaries that include never-before-seen footage from the Henson archives, and new interviews with the people who created The Dark Crystal.

Grade: The Dark Crystal – A-