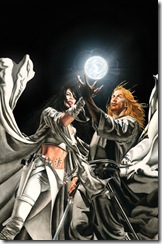 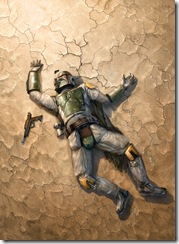 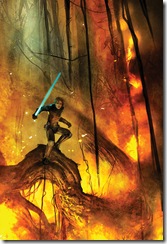 Star Wars was the subject of big announcements by Dark Horse Comics today at the New York Comic-Con. Five new Star Wars series will deal with everything from the earliest days of the Jedi in Star Wars: Dawn of the Jedi, to a blood call for vengeance following the death of Bobba Fett in Star Wars: Blood Ties – Bobba Fett Is Dead! There will also be a Darth Vader adventure – Star Wars: Death Vader and the Ghost Prison; a series, Star Wars: Knights of the Republic – War, that details a war between the Republic and the Mandalorians, and a new Knights Errant series – Star Wars: Knights Errant – Escape.

A NEW BEGINNING FOR THE OLD REPUBLIC!

The Republic and the Mandalorians are at war! Following the charismatic Revan, Jedi are joining the fight, despite the noninterference stance of the Council. One Jedi, however, has found himself on the front lines against his wishes—the peace-loving Zayne Carrick has been drafted!

Written by Star Wars master John Jackson Miller, with cover art by Benjamin Carré and a variant cover by Dave Wilkins, Knights of the Old Republic—War doesn’t just mark the return of one of the most popular eras in Star Wars video games and comics—it is an entry point for any reader interested in Star Wars!

TAKING YOU BACK TO THE BEGINNINGS OF THE JEDI!

Series creators John Ostrander and Jan Duursema have gone from the future of Star Wars (Legacy) to the beginnings of that galaxy far, far away to reveal the mythic age of the Jedi’s origin.  This is the Star Wars era of legend!  Launching with a #0 issue, which will serve as the official guide for readers –Star Wars: Dawn of the Jedi is the perfect jumping on point for any fan of Star Wars!

Here’s your first look at the Star Wars of 25,000 years ago—before there were lightsabers, when the ties to the Force were new, and before the Jedi spread out into the galaxy.  It began with the mysterious pyramid ships—the Tho Yor—scattered to the eight corners of the galaxy, and ended with the establishment of an Order that would change the universe forever.

On the planet Tython, in the center of the galaxy, an order of warrior monks strives to maintain peace and to balance the mysterious power known as the Force. But a stranger is coming—one who will destroy both peace and balance, and open the galaxy to exploration and conquest. This is where it all begins!

The upcoming 5-issue series is slated to be released next May and will be written by Haden Blackman, with artwork by Agustin Alessio.

Ghost Prison takes place a year after Revenge of the Sith and will showcase Darth Vader’s impact on the galaxy in ways fans have never seen.  Darth Vader will serve the Emperor to the best of his abilities, after all – Darth Vader makes no mistakes.

Ghost Prison also marks the return of Star Wars character Moff Trachta who will be vital to how the series unfolds.

Star Wars: Darth Vader and The Ghost Prison is in stores May 2012.

October 13th, NEW YORK, NY – Fresh from the panel at New York Comic Con, Dark Horse Comics is back with new series arcs from two of their most popular Star Wars books!

Established Star Wars writer Tom Taylor is back with another stunning Blood Ties series to be released in April 2012.

"Boba Fett is dead. The most infamous hunter in the galaxy has been hunted. He’s lying, broken, on the desert floor. He’s more blaster-holes than man. It’s the ultimate ending. However, this is just the start of our story. With the fall of Fett broadcast across the galaxy, someone rises to avenge him. But who would care about the death of a man like Fett? Bounty hunters aren’t exactly known for their enduring, close friendships but even a man like Boba Fett has family… and now a Blood Tie demands blood."  -Tom Taylor

The next installment of the sunning Knight Errant series was announced today.  Star Wars: Knight Errant – Escapewill launch in June 2012 for a 5-issue arc.

Jedi Knight Kerra Holt continues her one woman crusade against the Sith from behind enemy lines on her most dangerous mission yet!