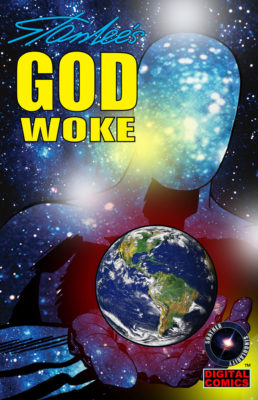 What would a Comic-Con International be without Stan Lee?

Stan Lee’s God Woke is written by Fabian Nicieza (creator of Deadpool) and drawn by Mariano Nicieza and ‘a team of great artists.’

The graphic novel will be available from comiXology.com on July 22nd. Follow the jump for the hyperbolic press release.

“I’m very excited to collaborate with William Shatner and Fabian Nicieza in reimagining one of my all-time favorite stories into a fabulous Digital Comics and Graphic Novel Hardcover Book opus of epic proportions. Just wait till you feast your eyes on this one!”

STAN LEE’S ‘GOD WOKE’ is a timeless tale of humanity’s search for meaning … and a fresh take on God’s own search for same. Unique and thought-provoking, Stan Lee’s original story is adapted with the insightful understanding of character that Fabian Nicieza brings beautifully to life and Mariano Nicieza has lavishly illustrated along with a team of talented artists. ‘GOD WOKE’ will be available through comiXology.com starting July 22, 2016.

“It is our honor and privilege to celebrate Stan Lee’s 75th anniversary in the comics industry as well as the launch of our 2016 line of Shatner Singularity projects with the amazing ‘God Woke’ graphic novel.“

‘GOD WOKE’ additionally will be released in print through Diamond Comics Distributor, and later as a Cinematic Graphic Novel, LNL Partners’ exclusive form of enhanced digital comics with music and visual effects.

“It’s great to be working with Stan again, and I’m honored to be chosen to adapt such a personal work. Stan bared his soul and created something fans are going to love.“

Overseeing the project are editors Frank Lovece for Shatner Singularity and Matt Murray for POW! Entertainment.

“This story has all the classic ‘cosmic’ elements that Stan Lee has mastered over the years. Our main goal as artists on ‘GOD WOKE’ is to enhance the awesome prose with equally stunning visuals. This project is a perfect complement to Stan’s 75th anniversary and will surely stand out as one of his greatest!”

“‘GOD WOKE’ is going to surprise people. There’s a depth and feeling to it that will be eye-opening to anyone who knows only the rock-’em sock-’em Stan we all love. This is a legacy work.”

3) Chuck Jones Gallery, 232 Fifth Avenue at 5:00pm
Special preview painted art and prints will be on display at all of these events.

WILLIAM SHATNER is the main founder and CEO of Shatner Singularity, a diverse-format publishing imprint. He is an award-winning and celebrated author, actor and producer and a cultural icon for his portrayal of James T. Kirk, Captain of the USS Enterprise, in the Star Trek franchise. He is as well a prolific writer with multiple book series; his Man O’ War and The Law of War books have been adapted into Cinematic Graphic Novels and digital comics under the umbrella title William Shatner’s War Chronicles.

STAN LEE is the co-creator of Spider-Man,™ the Fantastic Four, ™ the Hulk, ™ Iron Man™ and countless other classic characters, and remains the Chairman Emeritus of Marvel. As founder and CCO of POW! Entertainment, along with President and co-founder Gill Champion, he continues to create original characters and develop intellectual properties to this day. His many awards include the Medal of Arts honor, bestowed by President George W. Bush.

FABIAN NICIEZA, with over 1,000 comic-book credits and more than 200 million comics sold, co-created the hit character Deadpool and many other important figures in the Marvel universe. He has written or edited every major comic book, from Avengers to X-Men, Batman to Buffy the Vampire Slayer. As Chief Innovation Officer of Starlight Runner Entertainment, he developed multiplatform content for dozens of major franchises including Pirates of the Caribbean, Men in Black, The Amazing Spider-Man, Transformers, Teenage Mutant Ninja Turtles and James Cameron’s Avatar.