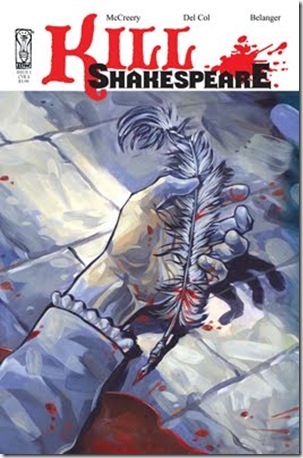 Kill Shakespeare #1: A Sea of Troubles is one of the stranger comics I’ve read. The premise is that England is under the thrall of thee evil wizard, William Shakespeare – and that banished Danish Prince Hamlet is the one prophesied to kill him and free England from tyranny.

The story begins in Denmark, where King Hamlet has been killed and his wife, Gertrude has married his brother Claudius – the two now ruling together. Hamlet, pretending to be mad, kills Polonius as in the play, thinking he’s Claudius hiding behind a curtain and winds up banished. While at sea, he learns of Claudius’ plans to have the English king, Richard, kill him – but the plan is thwarted by Rosencrantz and Guildenstern just before their ship is attacked by pirates. Rosencrantz and Guildenstern, sadly, wind up dead here, too. Hamlet awakens in Richard’s castle, where he learns of Shakespeare’s tyranny through magic.

There is magic in this world – and probably ghosts, too – as evidenced by the trio of witches that haunt Hamlet in his dreams and on person once he reaches England. The question is who do we believe? The witches are the classic hags – not a good sign – and that they work for Richard III is also troubling.

Writers Conor McCreery and Anthony Del Col have clearly read their Shakespeare. A Sea of Troubles is rife with details from his works that are spun in interesting new ways – the witches from Macbeth working for Richard the III is just one example. Kill Shakespeare is wordy, but one might expect that from any tale that uses Shakespeare as it basis, and the issue unfolds in much the same manner as a play – though with better effects.

Andy Belanger provides crisp art in dynamic layouts, bringing the feel of Shakespearean England [and Shakespeare’s take on Denmark’s royal court] to vivid life. Belanger favors clean lines with a minimum of detailing, reminding me of George Tuska’s work on the Buck Rogers strips of the sixties. It’s not overtly flashy, but it gets the job done. It has the same feel as when you read a book and it seems to read itself to you – there’s no wasted space, and the story takes on a kind of transparency that draws you into it.

As good as it is, A Sea of Troubles is more than a bit plot heavy, so it’s good that the art and dialogue are as free of unnecessary flamboyance and they are. The result is that the story seems to be a bit ponderous – but not enough to be off-putting. It’s a good solid start on what looks to be a very entertaining series.