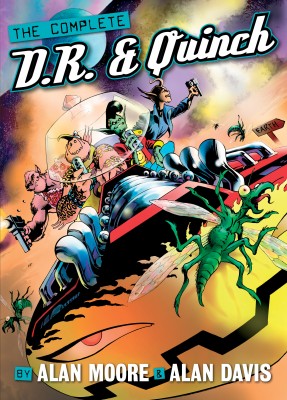 Some of the most iconic figures in comics history have been published by 2000 AD: Judge Dredd, Rogue Trooper, DR & Quinch and Strontium Dog among them. Known for their cavalier attitude toward such niceties as ethics, morals and even the law, these characters have provided fans with unfettered action, seriously demented satire and enough pure adventure to satisfy even the legendary Joe Bob Briggs. For the first time, these iconic characters will be available in North America, as Rebellion Publishing announces the upcoming US launch of iconic British comic 2000 AD’s US Graphic Novel list this June.

For many years 2000 AD Graphic Novels have only been available in North America in highly sought-after imported editions through the direct comics-store market. 2000 AD has developed a large following in the United States – evident in the success the cult British comic has had selling out at every San Diego Comic-Con. This new list meets the clamouring demand from thrill-seekers throughout North America for Judge Dredd and 2000 AD’s roster of stellar characters.

The books will be printed in the United States and distributed by industry major Simon and Schuster. The new North America-only list includes classic collections, outstanding new work from the hottest up-and-coming talents as well as thematic compilations which collect the work of some of the biggest names in comics, such as Alan Moore, Dave Gibbons, Garth Ennis, Grant Morrison, Alan Davis, John Wagner, Brian Bolland, Pat Mills, Mark Millar and many others.

The first releases are: