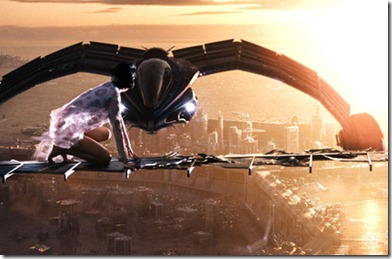 I’m not even going to try to synopsize Cloud Atlas as that would take far too long and be as frustrating as Prometheus’ daily struggle. What I will say is that there are six arcs interwoven throughout the nearly three hours of Cloud Atlas in such a way as to link themes, patterns of events and the manner in which characters and events in each arc influence characters and events in every arc.

Thus a kindness in one arc can lead to revolution against tyranny in another; an impossible bastard in one arc can have an equivalent in another arc become a hero. The film not only crosscuts story and character arcs, it skips genres – there’s an arc that is a pure mystery; another is a kind of science fiction action-adventure and yet another that that is a prison break. 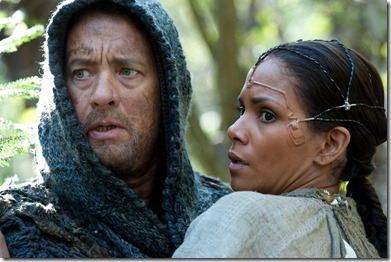 Throughout, Cloud Atlas is about identity, destiny, evolution – of life, science, philosophy, storytelling – and the idea that we are all linked to all of history, as well as to the future.

Undoubtedly, there will be protests that there are too few Asian actors and that too many white actors are put in Asian makeup – as one arc takes place in a future where the majority of people appear to be Asian. What may be overlooked is that the Asian cast members also double as white characters; black actors play black, white and Asian characters, and even a few white actors play black characters. That is one of the points being made in the film – we are all each other in some way and to some degree. 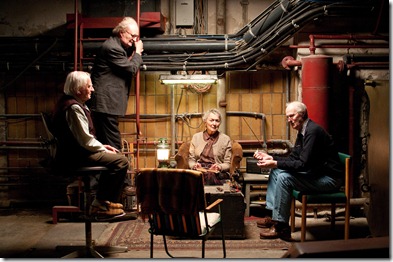 Another thing to consider is that that the people in that future may well be a mix of every race – again fitting into the theme that we are all each other: past, present and future.

In some cases, the makeup that transforms the cast is extraordinary (Halle Berry’s male character, for example), but some is a bit awkward (Hugo Weaving’s female character – though you certainly can’t tell it’s him…). Since so many different makeup designs are being used, it’s staggering how many are so terrific and how few are not.

The cinematography is outstanding – each arc has a look that is distinct and appropriate. Whether a tropical island, the ruin of a nuclear power plant or an American city of the seventies; whether a tale of treachery on the high seas, a futuristic setting on another planet, or a take on seventies grit, cinematographers Frank Griebe and John Toll deserve high praise.

There are few films this year that have been so dependent on editing. Cloud Atlas is a beautifully constructed puzzle box and directors Tykwer and the Wachowskis and editor Alexander Berner should figure in a lot of awards talk.

The screening I attended was in an unenhanced theater and it was enthralling. Beginning today, it is running in IMAX theaters and I plan to see it on an IMAX screen as soon as possible. It will undoubtedly be worth every penny.

Cloud Atlas is one of those films that you either love or hate. I love it.