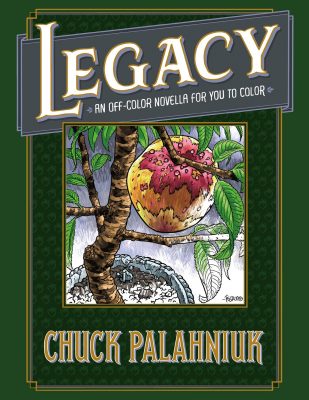 When it’s a semi-DIY graphic novel by the author of Fight Club and a trio of highly regarded artists.

Legacy: An Off-Color Novella for You to Color, by Chuck Palahniuk – with art by Mike Norton and Steve Morris (and a gorgeous cover by Duncan Fegredo), is ‘a dark but colorful fable with aspiring immortals, an amoral banker and his despicable family, a stalker and the kind of extreme storytelling and biting social satire’ that Palahniuk’s readers have come to expect.

Legacy: An Off-Color Novella for You to Color will be in stores and comics shops on November 7th.

Announcing “Legacy: An Off-Color Novella for You to Color”, Illustrated by Mike Norton and Steve Morris

MILWAUKIE, Ore., (June 19, 2017)—This fall, Dark Horse Books is publishing bestselling author Chuck Palahniuk’s novella, Legacy: An Off-Color Novella for You to Color, which features colorable illustrations by Steve Morris and Mike Norton. The novella is a dark but colorful fable with aspiring immortals, an amoral banker and his despicable family, a stalker and the kind of extreme storytelling and biting social satire that the readers of Fight Club, Choke and Survivor have come to expect. The new book follows Dark Horse’s release of Palahniuk’s first ever coloring book for adults and most recent short story collection, Bait: Off-Color Stories for You to Color, and the hardcover release of the #1 New York Times bestselling graphic novel Fight Club 2 graphic novel last year. Legacy is Palahniuk’s first long form prose publication since the release of his novel Beautiful You in 2014.

“Imagine if Joseph Campbell produced a coloring book,” said Palahniuk. “Legacy will be one part Art Bell, one part Carl Jung, part George Noory, and right brain from cover to cover.  All cultures have their myths about attaining immortality, but Dark Horse, Mike, Mike Norton, Steve NorrisSteve and I are the first to slap such high culture anthropology into the low culture world of coloring.”

Legacy: An Off-Color Novella for You to Color is a 8.5 x 11 inch hardcover album, with uncoated and white interior paper stock, accompanied by a cover illustrated and colored by Duncan Fegredo and designed by Nate Piekos. Fegredo is arguably best known for his art on several acclaimed Hellboy graphic novels, including Hellboy: Darkness Calls (the first storyline to not feature art by Hellboy creator Mike Mignola) and Hellboy: The Wild Hunt, featuring the fan favorite Blood Queen storyline.

Two acclaimed artists provides colorable illustrations throughout the book: Mike Norton, the creator of the Eisner and Harvey Award-winning webcomic Battlepug, and Steve Morris, who’s best known for his art for Buffy the Vampire Slayer comic books. Legacy: An Off-Color Novella for You to Color goes on sale from Dark Horse Books in both comic book stores and bookstores on November 7, 2017.

“Each reader will bring his or her final details to the story,” said Palahniuk. “When colored, each book will be a one-of piece of collaborative art worth keeping for the ages!”

CHUCK PALAHNIUK is the author of fourteen novels—Beautiful You, Doomed, Damned, Tell-All, Pygmy, Snuff, Rant, Haunted, Diary, Lullaby, Choke, Invisible Monsters, Survivor, and Fight Club—which together have sold more than five million copies in the United States. He is also the author of Fugitives and Refugees, published as part of the Crown Journeys Series; the nonfiction collection Stranger Than Fiction; the short story collection Make Something Up; the short story collection and coloring book, Bait: Stories for You to Color and the New York Times best-selling graphic novel Fight Club 2. He lives in the Pacific Northwest. Visit him on the web at ChuckPalahniuk.net.

DUNCAN FEGREDO is a British illustrator working predominantly in comics. In recent years he has been known for his work on Mike Mignola’s Hellboy, but before that he collaborated with writer Peter Milligan on several works, not least of which was Enigma, which became part of the birth of the DC Comics Vertigo imprint. Other works of note include Jay & Silent Bob: Chasing Dogma with writer/director Kevin Smith and MPH with Mark Millar. Fegredo also took an all-too-brief sojourn into film, storyboarding Darren Aronofsky’s Noah, and is currently doing the same on a much-loved space fantasy franchise, much to the delight of his thirteen-year-old self and endlessly accommodating and wonderful wife, Diana.

STEVE MORRIS is both a digital and a traditional artist and designer. He’s provided cover art for several Dark Horse comics, including Angel & Faith, Buffy the Vampire Slayer, Falling Skies, and The Strain. Morris graduated from the School of Visual Arts in 1994 as a fine art major but soon was working as a designer, and later art director, in NYC’s print and web industries. He’s found that the dual careers of art and design dovetail nicely and often lead to new discoveries as each of them is folded into his creative endeavors.

MIKE NORTON is the creator of the Eisner and Harvey Award-winning webcomic Battlepug and of the political comic Li’l Donnie. He is also the co-creator and artist of Revival, the critically acclaimed Image series and the Dark Horse Comic series The Answer! He lives in Chicago with his wife and two pugs. He is also very, very tall