Great news for fans arrived today from NBC with their announcement that freshman series Chicago Fire has been granted a full season order.  The official Press Release follows:

NBC has picked up its new freshman drama “Chicago Fire” with a production commitment for the remainder of the 2012-13 season, it was announced today by Jennifer Salke, President, NBC Entertainment.

“We all love this thrilling new drama with its sexy breakout cast. We are excited to see it gaining traction on our schedule,” said Salke. “Executive producer Dick Wolf and all the producers have done an amazing job developing a high-stakes series with lots of great heroic characters whose exploits are depicted in Dick’s typically epic storytelling style. We are incredibly invested in this one and can’t wait to hear about their plans for the rest of the season.”

“Chicago Fire” is averaging a 2.4 rating, 7 share in adults 18-49 and 8.0 million viewers overall in “most current” averages from Nielsen Media Research through the season’s first six weeks. In “live plus same day” results for the current week, “Chicago Fire” generated new series highs in adults 18-49 and total viewers, making it the first new drama on ABC, CBS, NBC and Fox this season to top its premiere results with any subsequent telecast. 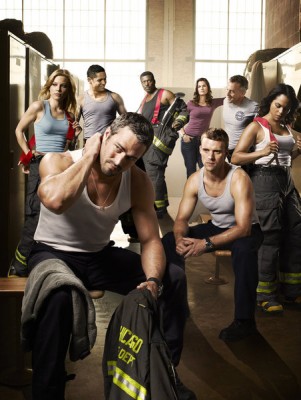 From renowned, Emmy Award-winning executive producer Dick Wolf (“Law & Order” brand) and creators Derek Haas and Michael Brandt, the writing team behind “3:10 toYuma,” comes the high-octane drama “Chicago Fire” — an edge-of-your-seat view into the lives of everyday heroes committed to one ofAmerica’s noblest professions. For the firefighters, rescue squad and paramedics of Chicago Firehouse 51, no occupation is more stressful or dangerous, yet so rewarding and exhilarating. These courageous men and women are among the elite who forge headfirst into danger when everyone else is running the other way.

The pressure to perform on such a high level has a way of taking a personal toll, sometimes putting team members from the Truck and the specially-trained Rescue Squad at odds with each other. Lt. Matthew Casey (Jesse Spencer, “House”), in charge of the Truck, butts heads with the brash Lt. Kelly Severide (Taylor Kinney, “The Vampire Diaries”) of the Rescue Squad.

The firehouse also includes: Battalion Chief Wallace Boden (Eamonn Walker, “Oz”); paramedics Gabriela Dawson (Monica Raymund, “The Good Wife”) and Leslie Shay (Lauren German, “Hawaii Five-O”); Peter Mills (Charlie Barnett, “Law & Order: SVU”), an academy graduate who is the latest generation in a family of firefighters; and Christopher Herrmann (David Eigenberg, “Sex and the City”), a seasoned veteran who must uproot his family to move in with his in-laws.

One thought on “Chicago Fire Given a Full Season Pickup”