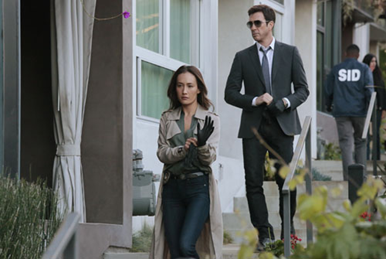 Get your first look at CBS’ five new fall series – Madam Secretary, The McCarthys, NCIS: New Orleans, Scorpion and Stalker (pictured) – on CBS Fall Preview, hosted by the voice of CBS Sports and Thursday Night Football’s play-by-play announcer, Jim Nantz. The half-hour special airs Monday, September 1st (8:30/9:30C) – and will be available On Demand on TV across a number of platforms. For further details, follow the jump.

“CBS FALL PREVIEW,” A SPECIAL PRESENTING A “FIRST LOOK” AT THE NETWORK’S NEW FALL SERIES, WILL BE BROADCAST MONDAY, SEPT. 1

CBS Stations Have Opportunity to Present the Special in Encore Showings on Their Primary and Digital Channels – and Stream It on Their Websites – Through Sunday, Sept. 21

The Special Will Also Be Available On Demand on CBS.com, the CBS App and Select CBS Audience Network Partner Sites Through Sept. 21

CBS FALL PREVIEW, hosted by the voice of CBS Sports and Lead NFL Play-By-Play Announcer Jim Nantz, is a primetime special highlighting the Network’s addition of THURSDAY NIGHT FOOTBALL and its five new fall series. It will be broadcast Monday, Sept. 1 (8:30-9:00 PM, ET/PT) on the CBS Television Network, just in time to serve viewers looking for clear, convenient programming information ahead of the new television season. The CBS FALL PREVIEW is an important part of CBS’s strategy to make information about its new shows easy to find amid the increasingly complex programming environment.

The special will also be available On Demand on CBS.com, the CBS App (http://www.cbs.com/mobile/) and select CBS Audience Network partner sites through Sept. 21.

Additional information about the THURSDAY NIGHT FOOTBALL and the five new series follows:

In partnership with the NFL Network, the THURSDAY NIGHT FOOTBALL broadcasts will feature CBS’s lead broadcasters and production team, including Jim Nantz and Phil Simms along with Tracy Wolfson. THURSDAY NIGHT FOOTBALL kicks off on Sept. 11 with Pittsburgh-Baltimore from M&T Bank Stadium in Baltimore, Md. CBS’s James Brown and Bill Cowher, along with NFL Network’s Deion Sanders, also will team up on the CBS and NFL Network primetime pre-game and halftime coverage each Thursday night.

A special “doubleheader” broadcast of the series premiere of MADAM SECRETARY will air Sunday, Sept. 21 (8:30-9:30 PM, ET, 8:00-9:00 PM, PT, with an encore broadcast at 10:30-11:30 PM, ET, 10:00-11:00 PM, PT). MADAM SECRETARY stars Téa Leoni as Elizabeth McCord, the shrewd, determined, newly appointed Secretary of State who drives international diplomacy, battles office politics and circumvents protocol as she negotiates global and domestic issues, both at the White House and at home. A college professor and a brilliant former CIA analyst who left for ethical reasons, Elizabeth returns to public life at the request of the President following the suspicious death of her predecessor. The President values her apolitical leanings, her deep knowledge of the Middle East, her flair for languages and her ability to not just think outside the box, but to not even acknowledge there is a box. McCord’s team includes her Chief of Staff Nadine Tolliver (Bebe Neuwirth), speechwriter Matt Mahoney (Geoffrey Arend), press coordinator Daisy Grant (Patina Miller) and her charming assistant Blake Moran (Erich Bergen). When McCord debates third world problems, finesses foreign dignitaries at work and does battle with the President’s combative Chief of Staff Russell Jackson (Željko Ivanek), it’s just a warm-up for when she goes home to her supportive husband Henry (Tim Daly) and their children, where “politics” and “compromise” take on new meaning.

SCORPION, premiering Monday, Sept. 22 (9:00-10:00 PM, ET/PT) and inspired by a true story, is a high-octane drama about eccentric genius Walter O’Brien (Elyes Gabel) and his team of brilliant misfits who comprise the last line of defense against complex, high-tech threats of the modern age. As Homeland Security’s new think tank, O’Brien’s “Scorpion” team includes Toby Curtis (Eddie Kaye Thomas), an expert behaviorist who can read anyone; Happy Quinn (Jadyn Wong), a mechanical prodigy; and Sylvester Dodd (Ari Stidham), a statistics guru. Pooling their extensive technological knowledge to solve mind-boggling predicaments amazes federal agent Cabe Gallo (Robert Patrick), who shares a harrowing history with O’Brien. However, while this socially awkward group is comfortable with each other’s humor and quirks, life outside their circle confounds them, so they rely on Paige Dineen (Katharine McPhee), who has a young, gifted son, to translate the world for them. At last, these nerdy masterminds have found the perfect job: a place where they can apply their exceptional brainpower to solve the nation’s crises, while also helping each other learn how to fit in.

NCIS: NEW ORLEANS, premiering Tuesday, Sept. 23 (9:00-10:00 PM, ET/PT), is a drama about the local field office that investigates criminal cases affecting military personnel in The Big Easy, a city known for its music, entertainment and decadence. Leading the team is Special Agent Dwayne Pride, a.k.a. “King,” (Golden Globe Award winner Scott Bakula) a native of New Orleans who is driven by his need to do what is right. Working with Pride is Special Agent Christopher LaSalle (Lucas Black), who plays hard but works harder; and Special Agent Meredith “Merri” Brody (Zoe McLellan), a charismatic and tough interrogator who transferred from the Great Lakes office in search of a fresh start. Supporting them is Medical Examiner Dr. Loretta Wade (CCH Pounder), who is as eccentric as she is smart. This colorful city that harbors a dark side is a magnet for service personnel on leave, and when overindulgence is followed by trouble, Pride’s team is at its best.

STALKER, premiering Wednesday, Oct. 1 (10:00-11:00 PM, ET/PT), stars Maggie Q and Golden Globe Award winner Dylan McDermott in a psychological thriller about detectives who investigate stalking incidents – including voyeurism, cyber harassment and romantic fixation – for the Threat Assessment Unit of the LAPD. Det. Jack Larsen (McDermott) is a recent transfer to the Unit from New York City’s homicide division, whose confidence, strong personality and questionable behavior has landed him in trouble before – but whose past behavior may also prove valuable in his new job. His boss, Lt. Beth Davis (Q), is strong, focused and an expert in the field, driven by her traumatic personal experience as a victim. With the rest of their team, young but eager Det. Ben Caldwell (Victor Rasuk) and deceptively smart Det. Janice Lawrence (Mariana Klaveno), Larsen and Davis assess the threat level of cases and respond before the stalking and intimidation spirals out of control, all while trying to keep their personal obsessions at bay. Elizabeth Röhm also stars.

THE McCARTHYS, premiering Thursday, Oct. 30 (9:30-10:00 PM, ET/PT), is a comedy about a close-knit, sports-crazed Boston family whose somewhat athletically challenged son, Ronny (Tyler Ritter), is chosen by his father to be his assistant high school basketball coach, much to the surprise of his more qualified siblings. Ronny wants nothing more than to move away, join the singles scene and find a partner. His distraught mother, Marjorie (Laurie Metcalf), is not upset that her favorite son is gay, but that he wants to leave Boston and his family. Ronny’s plans change, however, when his politically incorrect and outspoken father, Arthur (Jack McGee), stuns everyone with his choice for an assistant. Touched by his father’s offer, Ronny embarks on a completely different future – and he can be sure that his loving family, including his twin brothers Sean and Gerard and his sister Jackie, are going to have a very vocal opinion about it. Joey McIntyre, Jimmy Dunn and Kelen Coleman also star.

Photo by Richard Cartwright/Courtesy of CBS