The folks at Disney/Pixar have released looks at some new characters from Cars 2.

Grem is a dented, rusty orange AMC Gremlin. After years of being dismissed for his design, even being called a “lemon,” Grem has a big chip on his fender that has led him to the underworld of international espionage. As a henchman for a villainous boss Professor Z, Grem and his partner-in-crime Acer are trying to sabotage the World Grand Prix and the famous race cars competing in it. When Grem and Acer mistake Mater for an American agent with important top-secret information, the ruthless lemons set out on a round-the-globe chase to stop Mater from foiling their evil scheme.

Acer has always felt like an outcast in the car world. The beat-up green AMC Pacer joined forces with fellow “lemon” cars as henchmen for the devious Professor Z, whose clandestine mission is to wreak havoc at the highly visible World Grand Prix. Acer must hunt down the American and British secret agents who’ve stolen crucial information about Professor Z’s underhanded plot—his primary target just happens to be Mater, who’s been mistaken for a spy. Acer tries very hard to be a tough guy, but he’s over-eager compared to his no-nonsense accomplice Grem.

Shu Todoroki is a Le Motor Prototype racer representing Japan and bearing #7 in the World Grand Prix. Shu was raised at the base of the active Mount Asama volcano in Japan, and soon became a champion on the Suzuka Circuit. His sleek design sports a fiery red Ka-Riu dragon, which Shu borrowed from Japanese legend because he relates to the small, yet fierce nature of the dragon. His team legacy is filled with victories – his coach, a Mazda, was the only Japanese car to ever win at Le Mans – and Shu hopes to prove his champion-level racing on the international stage of the World Grand Prix.

Francesco Bernoulli (voice to be announced)

Francesco Bernoulli grew up in the shadow of the famous Monza race course in Italy where he and his friends would sneak onto the track and race the famous Pista di Alta Velocita bank turn. He was an instant winner on the amateur circuit and soon became an international Formula Racer champion. The ladies love Francesco’s open wheels, youngsters look up to his winning spirit and fellow racers envy his speed. But Francesco’s biggest fan is Francesco himself, as evidenced by his racing number. As the most famous race car in Europe, #1 Francesco is a favorite to win the World Grand Prix, which also makes him Lightning McQueen’s chief rival. 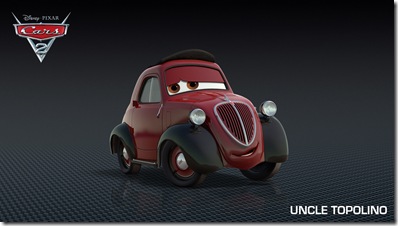 In the small village of Santa Ruotina, near Porto Corsa, Italy, Luigi’s favorite uncle, Uncle Topolino, resides with his beloved wife, Mama Topolino. Uncle Topolino is the owner of the village’s tire shop, where he taught Luigi and Guido everything they know, though Uncle Topolino is full of sage advice about more than just tires. 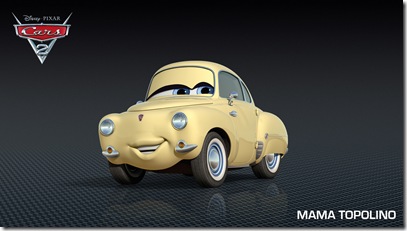 To all who know her, Luigi’s aunt, Mama Topolino, is a masterful cook with the best fuel in the village of Santa Ruotina, near Porto Corsa, Italy. Though she has a loving, but fiery relationship with her husband, Uncle Topolino, she shows her love and generosity for both family and friends by feeding everyone her renowned delizioso fuel.