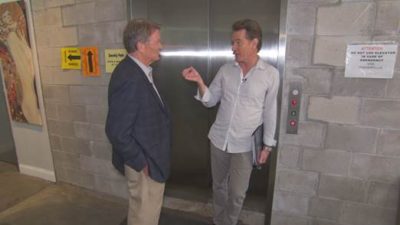 Bryan Cranston has been working steadily in some pretty prestigious projects since finishing his fiver season stint on Braking Bad – but it wasn’t always like that.

Cranston reveals the highs and lows of his career (being cut from Amazon Women on the Moon; doing  hemorrhoid commericials; a particularly nasty bee sting while shooting Malcolm in the Middle, for example) during an interview with Steve Kroft for 60 Minutes 0n Sunday, October 9 (7:30/6:30C).

His performance was cut from “Amazon Women on the Moon.” He made hemorrhoid ointment commercials and did the soaps. He was even stung by a bee on a private part while filming a silly “Malcolm in the Middle” episode. This was Bryan Cranston’s life before he broke out in the hit TV show “Breaking Bad.” Now things keep getting better for the man acclaimed for playing the chemistry-teacher-turned-drug-lord Walter White. Cranston talks to Steve Kroft about his life before and after making it big for a 60 MINUTES profile Sunday, Oct. 9 (7:30PM ET) on the CBS Television Network.

The kudos he won for his Emmy-winning stint in “Breaking Bad” led to opportunities to win a Tony and get nominated for an Oscar. “It’s surprising for an old journeyman actor,” says the 60-year-old Cranston. Stardom wasn’t expected, he says. “The things you want professionally are opportunities, and through good fortune, that’s what happened. Opportunity has come to me,” he tells Kroft.

The Oscar nomination was for his leading role in “Trumbo.” He won his Tony for nailing the role of Lyndon Johnson in an ambitious play about the 36th president. “[Johnson] was Shakespearean in size…that’s a big bite to take and it scares me a little bit…I realized, ‘Oh, this is an enormous play and it almost all me….’ I started to panic.”

But he didn’t panic when a scene in “Malcolm in the Middle,” the fairly successful sitcom that he acted in before “Breaking Bad,” called for the actor to be covered in bees. “There were 75,000 of them,” he recalled. But he still got stung—in the worst place. “In one of the boys down below. Very sensitive. The beekeeper went, ‘Sorry. I’ll help you anywhere else, but I’m sorry.’”

“Malcolm in the Middle” ran for seven seasons before it was cancelled. It turned out to be his lucky break, however. “Had ‘Malcolm in the Middle’ been picked up, I would not have been available for the pilot of ‘Breaking Bad,’ and right now, someone else would be sitting in this chair talking to you. Not me,” Cranston tells Kroft.

Kroft and 60 MINUTES cameras visited him on the set of “Sneaky Pete,” a crime series he was filming for Amazon Prime. As Kroft reports, Cranston is the series co-creator, director and executive producer, and he acts in the drama. “I do force myself to sleep with myself to get the job. But that’s always a disappointment,” quipped Cranston. Watch the excerpt.