Entertainment News for The Rest of Us
Sheldon Wiebe
Movie Reviews, Movies
3 Comments 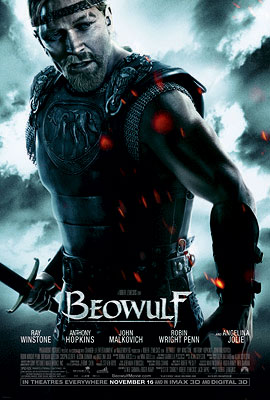 Roger Zemeckis has created an amazing world in Beowulf – the CG adaptation of the epic poem we all suffered through in high school English. Here, though, we get a loose adaptation that assigns human motivations to the major players – including the decidedly inhuman Grendel and his mother. Does it work? Just often enough make the expensive 3D process worth it.

The legend of Beowulf [voiced here by Ray Winstone] is a classic tale of heroism. When the sins of King Hrothgar [Anthony Hopkins] come back to haunt him – in the person of the destructive monster, Grendel [voiced by Crispin Hellion Glover – honest, that’s how his credit reads] – Beowulf sails to his rescue with his best friend, Wiglaf [Brendan Gleeson] and a dozen followers. Of course there are unexpected circumstances: Grendel has a peculiar relationship with Hrothgar; Grendel’s mother [Angelina Jolie] is not only a monster in her own right, she’s a shape-shifting seductress who promises Beowulf a kingdom if he’ll help her replace her son.

Writers Neil Gaiman and Roger Avery have attempted to add depth to the epic by giving the characters reasons for their actions. Beowulf is a glory-seeker – a seeming oaf who has the will, the strength and the guile, not to mention the hubris, to actually have achieved the feats of which he boasts. Hrothgar is a once ambitious man who was willing to do whatever it took to gain a kingdom. Grendel is a dim, lonely creature who is easily manipulated by his mother [his dying is strangely sad] – who is the last of her kind and desperate to not be alone.

First, I have to say that the film looks great on an IMAX screen. Beowulf’s CG/motion capture animation is as much of a breakthrough in today’s animation as Polar Express was a few years ago. The colors are vivid [and you haven’t lived until you’ve seen vivid grey, trust me]; the water and fire effects are leagues ahead of what has gone before. From certain angles, the near-photo real characters are amazing [though from other angles, they still look flat and occasionally unprepossessing]. The 3D effects are literally astounding!

Even if Beowulf was an awful film, it would still be worth your fifteen or sixteen bucks to see it on an IMAX screen. It is not, however, an awful film. Instead, it is just slightly above average.

The film’s design is beautiful, especially when it comes to the contrasts between the cold Nordic winter and the interior of the Hrothgar’s gigantic mead hall; between Grendel and his mother; between the fair Queen Wealthow [Robin Wright Penn] and her fat, now bumbling husband; the dragon [no spoiler – it’s in all the trailers] and its human form, etc., etc…

The action sequences are, for the most part quite brilliantly staged. When the naked Beowulf battles Grendel [Grendel wears no armor, carries no weapon – Beowulf want it to be a fair fight!], the animation is as fluid and real as anything seen in an Ultimate Fighting match. The climactic battle between Grendel and dragon may soon be eclipsed – that’s how fast advances in CGI are made – but right now, it’s the best CG battle I’ve ever seen.

Where the film misses the mark enough to gain only a marginally positive rating from me is in the scenes that don’t involve carousing or battle. In these scenes, Zemeckis uses angles and lighting that would work beautifully for a live action film but which make his animated characters seem flat and perfunctory. As my nephew put it, “the film doesn’t work when they go all emo!”

Even so, there’s enough good stuff here to give Beowulf a marginally positive review even before the incredible animation and 3D. When you factor in the addition of these elements, and seeing them on an IMAX screen, it does become well worth your hard-earned cash – especially if, like me, you’re into CGI and 3D