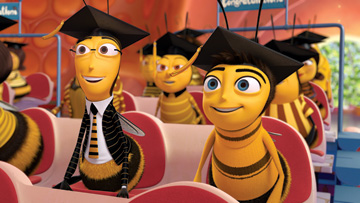 Jerry Seinfeld’s first excursion into the realm of CG animation is a lively, sleek [82 mins] legal comedy, ecological fable and unlikely romance – starring bees. Thanks to Dreamworks Animation and a heartfelt script, Bee Movie is actually the second movie I’ve seen in the last little while to warrant audience applause.

After a harrowing three days of education, Barry B. Benson [Seinfeld] is about to graduate university and select a job – a job that last the rest of his life! While his best friend, Adam Flayman [Matthew Broderick] is excited about the prospect of doing these things, Barry isn’t sure he wants to be one thing for the rest of his life. When the two friends try to hit on a couple of girls by pretending to be pollen jockeys, a real pollen jock dares him to venture outside the hive with his team on their next assignment. 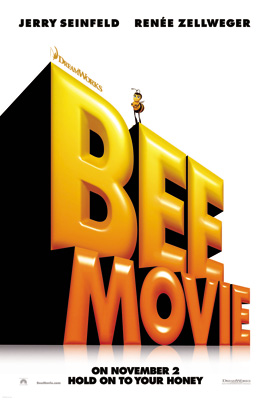 Barry does just that – and finds a stranger world than he could ever imagine. He breaks a bee rule and talks to a florist named Vanessa [Renee Zellweger], discovers that humans steal most of the honey bees make and sues the human race to get it all back. The consequences of his actions are quick and deadly – with enough honey that they don’t have to work, the bees stop working. The result is an ecological disaster.

While the ecological aspect of the movie is a bit on the ham-fisted side, none of the film really talks down to children – or up to adults, for that matter. The humor ranges from some inspired slapstick to bad puns, and everything in-between. Patrick Warburton is of particular note, voicing Vanessa’s boyfriend, Ken, a guy who thinks that turning his resume into a fold-out brochure is a masterstroke of self-promotion and is way too into tennis. 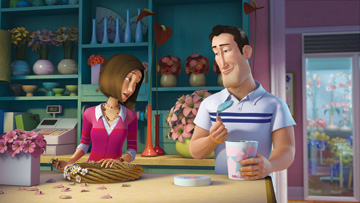 Chris Rock is along as a mosquito hitching a ride to Alaska because he’s heard that moose blood is a righteous experience, and John Goodman plays an evil version of every good ole boy, cornpone lawyer we’ve ever seen, as he defends the honey industry from Barry’s lawsuit.

The animation is lovely, coming to within a hair of matching PIXAR brilliance. The main characters are well drawn in both senses – character development-wise, and in terms of their CG design. Directors Steve Hickner and Simon J. Smith have produced a film that never stops moving, even in the more emotional character moments. 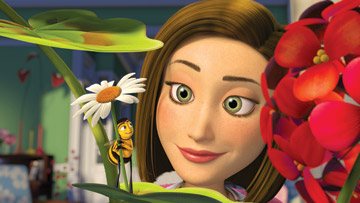 There equal measures of intelligence and wit here, though, as I said above, Bee Movie loses points for the rather awkward handling of the ecological crisis – though that is offset by some awesome visuals [millions of bees saving a jetliner, Superman style, for one]. Overall, the pluses outweigh the minuses by a wide margin – which might be why the audience at the screening I attended broke into applause at the end – not polite applause, either. Star Wars/Raiders/Transformers applause.