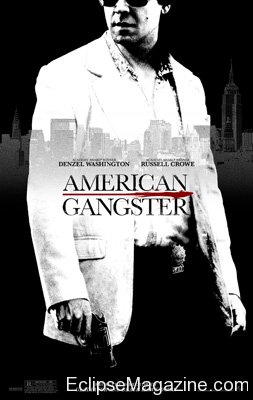 I’ll admit it, I’ve never been much of a fan of Denzel Washington, he’s a great actor but for some reason he just never did it for me. But in American Gangster Denzel captivates and hold the screen. He’s both charming and disarmingly deadly at the same time. I generally love gangster films but hate the over glorification of the lifestyle. Never once in AG did I feel American Gangster glorified Denzel’s Frank Lucas.

Lucas is cold and calculating, but exudes a quiet charisma. He’s smart enough to build his empire while avoiding the trappings of the Gangster lifestyle. Yes he has the fabulous houses, but he dresses in drab, suits to blend into the crowds. He’s not like other Gangsters of the period like Nicky Barnes (Cuba Gooding Jr.) a showboating, loud dresser who carries around copies of his press clippings. In one scene Lucas sees one of his cousins wearing a loud outfit and tells him to take it saying “Why are you wearing a suit that screams arrest me.” He says this in such a way that’s part concerned relative with a hint of something else behind his eyes.

This film isn’t as violent as you would expect, but the few moments there are, makes you yell “now that’s straight gangster.” The pacing of this movie is almost perfect, every time you start to imagine that Lucas is nothing more than an American businessman Director Ridley Scott will throw in a moment where you see exactly how brutal Lucas really is, or a scene of how his drug dealing is impacting his community.

What separates Lucas from every other Drug dealer at the time is, he’s smart and will do anything, but he also understands that at the end of the day he’s running a business. When he has trouble with the local tradesmen, he decides to go directly to the source of the drug trade, which is and is smart enough to use soldiers to import the stuff back into the states. Then he brands his product as well.

Trying to stop him is a down and out beat cop Detective Richie Roberts (Russell Crowe) who gets into trouble earlier in his career by returning a million dollars in unmarked bills, his fellow Officers don’t trust him because an honest cop can be dangerous to a corrupt department. 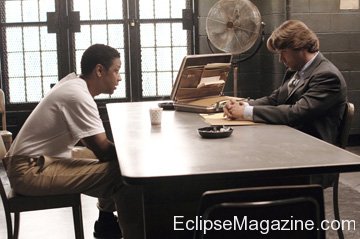 Crowe is one of those actors who I really don’t like, I’ve always felt him to be overrated and frankly I’ve hated all his films from “A Beautiful Mind,” to “Master and Commander,” he gives another one of his patented Crowe performances, but here it works. Roberts is downtrodden, he’s in the middle of a nasty custody fight, and he has to defend his friendship with his childhood friend who happens to be a local mob boss.

The film spends as much time showing us Roberts’s life as it does Franks, but it’s there to show the sharp contrast between predator and prey. In this case Lucas thinks he is a predator and he has no idea that he’s really the prey. Roberts goes after Lucas but the film never goes “,” where you have the stereotypical confrontation. No, Lucas has no idea Roberts exists that alone a reason to fear him. It’s like Heat where Pacino and De Niro don’t appear onscreen together until the end.

There’s a weird coda to the film that almost make everything seem sort of anti-climatic even when Roberts finally nabs Lucas it feels weird because again, Lucas never knew he was being hunted and had no clue who Roberts was, but somehow this felt more real to me than other Gangster films. What really surprised me was, apparently this film is based on a true person.

American Gangster is by far the best film of the year with stand out performances from Crowe and Washington.

3 thoughts on “American Gangster is Pure Oscar Bait, but it works! Michelle’s Review”