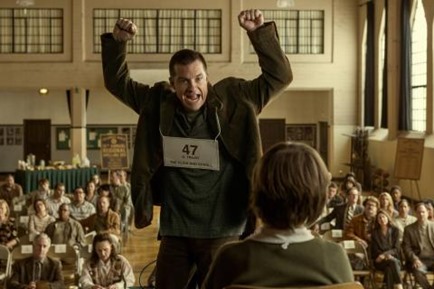 The primary draw for Bad Words is seeing Jason Bateman veer from his usual roles as decent Everyman types in favor of a potty-mouthed jackass. That works for a while, but gets old pretty quickly. Then it tries to shifts gear and goes for the feel good ending – without having its lead change too drastically. Mostly, it works.

Jason Bateman chose Bad Words (scripted by first-timer Andrew Dodge), as his first directorial effort because it allowed him to play a character who was not his usual, genial good guy. Indeed, Guy Trilby is almost ruthlessly nasty – a guy who finds a loophole that allows him to enter a spelling bee despite being forty years old. He even has the requisite sponsor –a nationally recognized online magazine, whose reporter, Jenny Widgeon (Kathryn Hahn), travels with him for a feature.

Once Trilby has shown that he complies with every regulation governing the competition, he proceeds to not only use his photographic memory to spell the most difficult words, he also behaves abominably in psyching out his younger competitors. Initially, at least, this creates some funny moments but as he wins through to The Golden Quill national finals, his efforts get progressively nastier until he almost loses us completely.

On the flight to the finals, an Indian finalist, Chaitanya Chopra (Rohan Chand) tries to make friends with him – overtures that he rejects in a most unpleasant manner, but the boy keeps trying.

Fortunately for Trilby (and us), Jenny is a good journalist and has contacts that provide us with information that, if not making Trilby less obnoxious, give us a glimmer of understanding. Between that revelation and Chaitanya’s relentless cheerfulness, the film never quite falls apart – despite a partial redemption for Trilby and a happy ending, both of which seem out of character but not enough to totally subvert what has gone before.

Allison Janney and Philip Baker Hall standout in the minor, though pivotal, roles of Dr. Bernice Deagen who has run The Golden Quill for almost twenty years, and Dr. William Bowman, founder of the competition. Steve Witting also is fine as the fumble-mouthed proctor of the final who stumbles through many of the words he has to give the competitors.

One of the reasons that Bad Words manages to hang on through the end is that, at eighty-nine minutes, it gets in, gets its laughs and gets out. There’s enough wit and humor in the first two-thirds to outweigh the attempt to graft a happy ending onto a film that really doesn’t want to have one.

Bateman keeps things quickly enough that he manages to create a compelling mix of sports movie, buddy movie and character study that never quite lets go. Plus, there’s a section of the competition where Trilby gets some ridiculously difficult words that allows Bateman the actor to excel as the nonchalantly brilliant speller and Bateman the director nails it, too.

Would Bad Words have been better if it hadn’t gone the redemption and happy ending route? Probably, but as a first effort from both its writer and director, it’s still pretty decent.