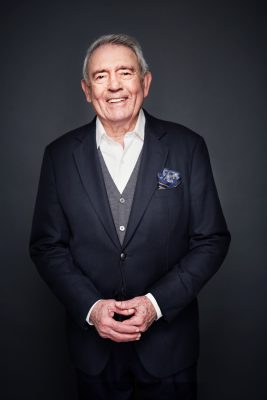 AXS is shifting the sixth season premiere of The Big Interview with Dan Rather from February 27th to March 13th (9/6PT). – when the series will premiere with Rather interviewing Robert Plant.

Other highlights include Robby Krieger and John Densmore of The Doors, Shania Twain and John Mellencamp.

Other Highlights Include Conversations with The Doors’ Robby Krieger and John Densmore, as well as Eddie Money, Shania Twain, John Mellencamp, & More?

Los Angeles, CA (January 18, 2018) – AXS TV has set a new premiere date for the network’s popular original series The Big Interview with Dan Rather—moving to Tuesday, March 13 at 9pE/6pE from the previously announced date of February 27. The upcoming season features 20 all-new episodes divided into spring and fall cycles, as legendary journalist Dan Rather sits down with some of music’s most influential artists for in-depth conversations covering their personal lives, extraordinary legacies, failures, triumphs, and so much more.

Season six opens with rock n’ roll trailblazer Robert Plant, the legendary Led Zeppelin front man and GRAMMY®-winning solo artist whose trademark vocals have powered such enduring hits as “Stairway To Heaven,” “Immigrant Song,” “Ship Of Fools,” and “Rainbow,” among others. During the intimate discussion, Plant opens up about his childhood in post-WWII Britain and the tragic loss of his five-year-old son; shares his thoughts on Led Zeppelin standards “Kashmir” and “Stairway To Heaven”; and explains how he has adapted his trademark vocals throughout the years.