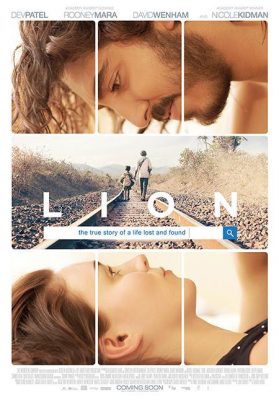 Set in modern India, Lion is based on the true stories as told through the eyes of five year old Saroo who gets lost on a train which takes him thousands of miles across India, away from home and family. Twenty five years later, armed with only a handful of memories, his unwavering determination, and a revolutionary technology known as Google Earth, he sets out to find his lost family and finally return to his first home.

Oscar® nominated screenwriter Davies is a writers’ writer, a poet and novelist, having won numerous awards, including the inaugural Prime Minister’s Literary Award for Poetry for his volume Interferon Psalms, and the Age Book of the Year prize for his volume Totem. He co-wrote the screenplay adaptation of his own novel Candy with director Neil Armfield.

IN TIGHTER: the same hands. Clearly a practiced routine. A YELLOW BUTTERFLY flutters onto the hand. The hand STILLS, so as not to scare the butterfly.

Our tiny figure (SAROO, 5) stands up, ever so carefully. FRONT ANGLE: we see him properly for the first time. Studying the butterfly. Entranced. Then he notices a few more. WIDER: he’s in a field entirely filled with their fluttering. Delighted, he spreads his arms wide. He moves through the

butterflies – fluttering all around his head and shoulders.

Suddenly – a 5-year-old testing his powers –

Here is what Davies had to share about India and his adapted screenplay Oscar nomination for “Lion.”

LD: Thank you. I am very proud of the script. The script is just the way station toward the thing that I am ultimately very proud of  which is the film [and] the thing that blows my mind is that every-time I see it, which is a good handful of times, I cry. And it’s like, why am I crying with I am so deeply involved in the engine room of the film.  I know it’s moving —but why am I still crying.

I think the answer is that Garth [Davis ] our beloved director has transformed it something so beautiful that I become an observer again.  That experience is rare, I think, and it speaks to his vision.  He is a visionary.  He made such a film that’s not manipulative. It’s very raw and very primal [to me] and very powerful and I am so proud to be part of that process.

Carefully, Saroo moves through the holy men, toward Kali. Four arms, garland of skulls, riding a lion. Spooky. At Kali’s feet, offerings: coconut shavings, pesos, nuts. Saroo looks at the men again; no one seems to be stirring. He bows quickly to Kali, and sneaks some of the offerings. Spies a sliver of unpopulated ground. He clambers in behind the small platform, lies down. Out of trouble, out of sight. His own corner of this metropolis. His eyes getting sleepy. Watching the sleeping holy men – and beyond them, the dark, wide river, flowing by.

Q: What do you love about being a storyteller?

LD: When I was 13 years old my whole life changed in one moment after I read Cannery Row by John Steinbeck. One minute essentially I am a little kid reading comic books … [then] … I felt like an adult. I no longer felt like an unhappy adolescent. I was like ‘oh my God’ I had stepped into some kind of palace and I had no idea that this exits.  The second thought was I want to do to other people, who just happened to me. [That experience] I know what I am now, I am a writer.

“Lion” is now playing in theaters.