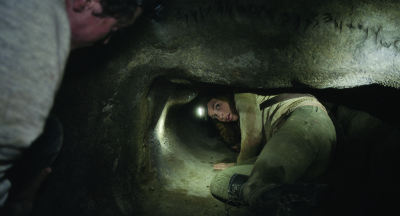 So, you’ve got elements of Tomb Raider/Indiana Jones; overt references to Dante and less overt references to Sartre; a strong (maybe even ridiculously strong ) female lead and the Philosopher’s Stone. What could that possibly add up to? A movie that is significantly better than its pathetic trailers (as with the folks that did the trailers for And So It Goes, the people who did these trailers should really never be allowed to work again). Just don’t go if you’re really, really claustrophobic.

As Above So Below opens with Scarlett (Perdita Weeks, The Tudors) in Iran looking for a Rosetta Stone to translate alchemical symbology – she races the destruction of an underground site by explosives; it’s all very pulse-pounding stuff. Very Lara Croft/Indiana Jones.

She finds what she’s looking for and manages to scan it just as stuff begins to blow up/cave in. Unfortunately for her, the writing is in Aramaic – not one of the four languages (and two dead ones) in which she’s fluent. For a translation, she needs to consult a friend of hers named George (Ben Feldman, Mad Men) – who has a habit of breaking into places (like centuries old cathedrals) and fixing stuff (like clocks/church bells that haven’t worked in over 200 years). In Paris.

The Philosopher’s Stone, it seems, was found/created by Nicholas Flaumel, the most accomplished alchemist in history, and he is said to have hidden it before his death. Through clues assembled by her late father – and work she’s done since (including that mystical Rosetta Stone) – she and Benji come to believe it must be hidden a specific depth below Flaumel’s grave.

How do they get there? The catacombs under Paris.

The pair enlist the aid of a rogue explorer of the catacombs named Papillion (Francois Civil, Rosemary’s Baby) – who looks nothing like a butterfly (in case you know that’s what Papillion means). Along with her cameraman, Benji (Edwin Hodge, The Purge, Cougar Town) and a couple of Papillion’s friends – Souxie (Marion Lambert) and Zed (Ali Marhyar, Zero Dark Thirty), she and George set out to find the Stone’s hiding place. 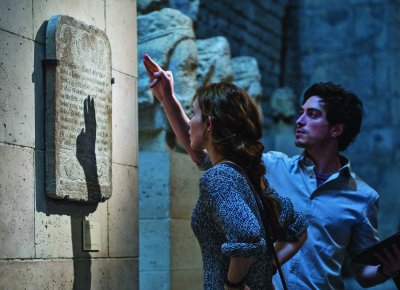 Cue the need arising for the group to have to use a tunnel that is supposed to be evil – where they are sort of joined by Paillion’s friend Le Taupe/The Mole (Cosme Castro) who disappeared into that tunnel years before and was thought to be dead.

From there, the seven set off and things get weird – Sartre and Dante weird. Each of the group sees something from their pasts; treasure is found, and the title comes into play. Events occur that relate back to bits of information we picked up during the first act; things go topsy-turvy and before you know it, everyone has to face their own private hell; down becomes up and things go terribly sideways.

As Above So Below is a better than average found footage horror movie – the scares are mostly of the collapsing tunnel variety, but there are a number of sudden attacks by various types of beings and the terrors of memory. Like most found footage movies, there are moments that are completely visible and moments when everything goes wonky as the cameraperson is bowled over, dodges something or suddenly changes direction.

An interesting conceit is having one specific cameraman (Benji), but having mini cams attached to each group member’s headlamps, giving us different points of view. This adds verisimilitude and allows for editing to have greater or lesser impact depending on the moment while feeling comparatively natural.

The performances are better than the character development (which is minimal), but not all the personal hells are as specifically built up as they might have been. The script by director John Erick Dowdle and Drew Dowdle could definitely have used a few more minutes of character work, but their riffs on horror tropes are interesting and fun.

The direction, by John Erick Dowdle (Quarantine, Quarantine 2), is solid – though he relies on sound effects, score and rapid camera shifts a bit too much to be completely effective. As Above So Below clocks in at 93 minutes, so it doesn’t overstay its welcome – almost always a Good Thing for horror movies.

On The Big Drink Scale, I had about a third of my ginormous diet cola left as the credits rolled.