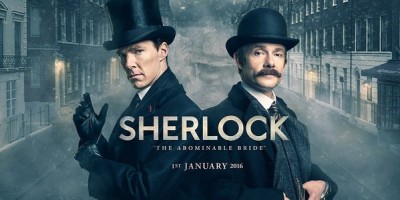 BBC Worldwide North America has set the dates for the theatrical appearance of The Sherlock Special: The Abominable Bride.

The two-night event – which includes twenty-minutes of exclusive content – will take place on January 5th & 6th, 2016. The Sherlock Special will air on PBS on January 1st and 10th. Follow the jump for details.

New York – October 26, 2015 – BBC Worldwide North America has partnered with Fathom Events for the first theatrical screening event of Sherlock: The Abominable Bride, marking the debut of Emmy Award® winners Benedict Cumberbatch and Martin Freeman on the big screen in their iconic roles as Sherlock Holmes and Dr. John Watson. The feature-length cinema screening will premiere on Tuesday, January 5 with an encore Wednesday, January 6, 2016 both at 7:30 p.m. local time. Theater audiences will experience 20 minutes of exclusive, additional footage which will include a guided set tour of 221B Baker Street hosted by co-writer/executive producer Steven Moffat prior to the feature, and a “making of” short film starring Benedict Cumberbatch, Martin Freeman and many more immediately following.  Sherlock is produced by Hartswood Films for BBC One and co-produced by Masterpiece.

Sherlock: The Abominable Bride will be shown on MASTERPIECE on PBS stations and pbs.org the same day as the UK on Friday, January 1 at 9pm ET, with an on-air encore on Sunday, January 10 at 10pm ET.

Tickets for Sherlock: The Abominable Bride will be available beginning Friday, November 6, 2015 and can be purchased online at www.FathomEvents.com, or participating theater box offices.  The special theatrical event is expected to play in over 500 theaters across the U.S. For a complete list of theater locations visit Fathom.com (theaters and participants are subject to change).

Sherlock: The Abominable Bride will see Benedict Cumberbatch and Martin Freeman reprise their roles as Sherlock Holmes and Dr. John Watson in a one-off episode set in Victorian London in 1895.  The episode has been co-written by Steven Moffat and Mark Gatiss with performances by Rupert Graves, Una Stubbs, Louise Brealey and Amanda Abbington.  It is directed by Douglas Mackinnon (Doctor Who, Line of Duty).

Sherlock is a global phenomenon, engaging audiences from Berlin to Beijing, from Texas to Tokyo.   The show has been sold to over 240 territories across the world, won 12 BAFTAs, 7 Emmys® and a prestigious Peabody Award as well as accolades at the Edinburgh TV Festival and the Television Critics Association.  Sherlock made its mark in U.S. pop-culture being one of only three British TV shows that have appeared on the cover of Entertainment Weekly.

“Sherlock on the big screen.  For us, it’s a giant leap backwards – into Victorian London. The mean streets of 1895 have never looked so good,” states co-writer Steven Moffat, October 2015.

“It’s not suddenly going to be a different show. It’s essentially our Sherlock as if we’d always done it set in 1895. It has the same sensibility. The language is obviously slightly different but we wanted it to feel as funny and as vivid as our modern-day one. Otherwise it would be a sort of dusty period piece which is not what we are interested in,” states co-writer Mark Gatiss, August 2015.