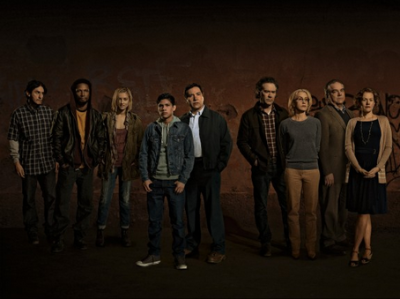 ABC and PodcastOne, the leader in advertiser-supported podcasts, announced today the launch of a new, original podcast series which takes an in-depth look at the groundbreaking new television drama “American Crime,” premiering Thursday, March 5, 10/9c on ABC. Each week, The American Crime Podcast, hosted by film critic and radio personality Elvis Mitchell, will feature behind-the-scenes insights and discussion about the program’s riveting suspense and powerful character storylines through candid conversations with the show’s creator and Executive Producer, Oscar®-winning screenwriter John Ridley, Executive Producer Michael McDonald, stars, and creative talent from the show. The podcast debuts today with a preview of what to expect in the television series, followed by weekly post-show episodes taking fans through the final episode of the season. The podcast also provides an insider’s look at the creative and technical process that brings each episode to life, including scriptwriting, directing, editing, scoring and more. The American Crime Podcast will be available on PodcastOne.com, the PodcastOne app and iTunes.

“American Crime” – Following the home invasion murder of Matt Skokie – a war vet – and an assault on his wife Gwen, four suspects are brought into custody: Tony Gutiérrez, an impressionable teen who got in way over his head even under the watchful eye of his dedicated and hard-working father, Alonzo Gutiérrez. Hector Tontz, a young man who has lived life on the fringes of society and has made bad decisions just to survive. Carter Nix and Aubry Taylor, two incredibly lost souls whose addiction to drugs and to one another has become destructive and paralyzing. Though the suspects fit a profile, they and their situations are far more complicated than anyone would have initially believed…as is true for the victims themselves. As Russ and Barb Skokie – divorced and estranged – arrive to both bury their son Matt, and seek a measure of justice for his killing, they discover their son may have been far from an innocent bystander in his own murder.

Told from the points of view of all those involved, this new drama examines preconceptions on faith, family, gender, race, class and other aspects of our social experience with an approach and perspectives historically underserved in media.