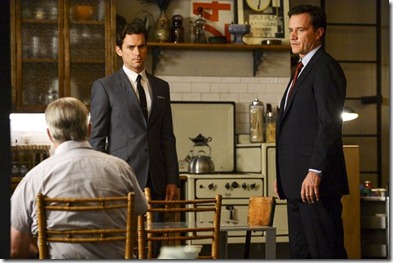 White Collar (USA Network, Tuesdays, 10/9C) returns with a caper that combines revelations about Neal Caffrey’s father with the resurgence of the crime family that forced Neal’s father to confess to a murder he did not commit.

James Bennett (Treat Williams) aka Sam levels with Neal (Matthew Bomer) about his past, though Neal isn’t sure whether to believe him. Coincidentally, Dennis Flynn Jr. (Scott Evans) is attempting to get his father’s criminal enterprise back up and running – and silencing Ellen was only a part of his plan. If Bennett shows his face, he will be killed, too.

Family Business sics Neal and FBI Agent Peter Burke (Tim DeKay) after Flynn, though Burke wants to take Flynn down for counterfeiting liquor and, while he’s behind bars, find the evidence to convict him of Ellen’s murder. Peter pretends to go along, but he has other plans.

Written by Joe Henderson, Family Business is as slick as the best White Collar eps, but strains our credulity a bit with the revelation that Neal can counterfeit quality liquor. Is there anything he can’t fake? Maybe he’s a semi-reformed super-villain? 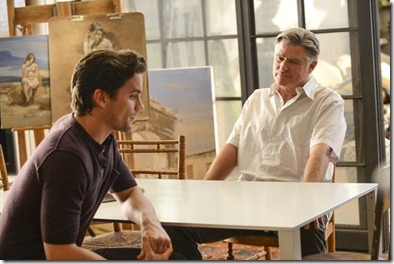 Still, at least he can’t fake the distinctive bottles which will contain his fake booze – for that, he needs (who else?) Mozzie (Willie Garson). Not only that, but Mozzie hasn’t blown glass for many years. Good think it’s like riding a bike – you never forget.

Another revelation concerns Agent Jones (Sharif Atkins), who turns out to be a dab hand at tasting whiskey, making him a ringer to provide Neal’s false brew a ringing endorsement. And, despite not getting a lot of screen time, Mrs. Suit, Elizabeth Burke (Tiffani Thiessen) plays a pivotal role in keeping things on track.

With a lot of balls to juggle, Paul Holahan keeps things moving at a quick enough pace that we don’t much mind Super Neal and Mighty Mozzie. The con is, despite Neal and Mozzie pulling yet another set of arcane talents out of the aether, an entertaining one. Evans makes Flynn a good villain by hiding his nastiness behind a generally posh air – which makes it fun to see the team go to work on him.

Williams, however, doesn’t hang around much after the teaser, basically staying just long enough to impart some exposition. His Bennett definitely works as Neal’s dad, though. After all, the way in which he pulled off the Sam identity theft reminds of Neal at his best. Despite his brief appearance here, there’s every reason to believe he’ll be back, so there’s that.

All in all, Family Business is a pretty average White Collar episode – which makes it better than a lot of shows´ best – and does set the stage for will assuredly be a very interesting winter run.