For those that use a Garmin GPS and like to use different voices to tell the directions, here’s some exciting news. UK characters Wallace & Gromit and U.S. Sesame Street characters Bert and Ernie have come to ALL Garmin GPS’s and is now currently available. More details from the press release after the jump:

GARMIN, IN ASSOCIATION WITH AARDMAN, SPOT IT OUT AND LOCUTIO VOICE TECHNOLOGIES LAUNCHES THE WALLACE AND GROMIT CHARACTER VOICE FOR GPS

Looking for a cheese shop? Rerouting around a Were-Rabbit? Garmin’s ‘Gromit Positioning System’ guarantees a grand day out!

New York, November 3rd, 2011 – Garmin, in association with Aardman, Spot It Out and global branded GPS voice developer Locutio Voice Technologies, is proud to announce the launch of the Wallace and Gromit Positioning System for Garmin personal navigation devices worldwide.

Available to download from November 3rd, 2011 users will be guaranteed an unforgettable journey with Wallace and his ever faithful friend Gromit who give turn-by-turn directions as their infamous van drives across the on-screen map.

Wallace’s quintessentially British lines include, “Three cheers for the Gromit Positioning System, we have reached our destination! Put the kettle on lad.” And, “Are we nearly there yet? Only Gromit’s got his Tai-Chi class later, an’ I’m ready for me tea.” ensuring drivers and passengers will be entertained throughout their entire journey.

Robert Goodchild, Senior Licensing Manager at Aardman Licensing, says, ‘Wallace and Gromit have always fancied themselves as pioneers in the world of technology and inventions. Now that the Gromit Positioning System (GPS) is available, we will be able to turn all users of Garmin navigation devices into committed followers of gently delivered, slightly madcap but uniquely humorous directions from Wallace!’

Chris Hilton, CEO of Locutio, developers of the Wallace & Gromit voice, says, ‘The Wallace & Gromit voice offers the perfect aural accompaniment to the search for that extra special Wensleydale cheese. Alternatively, the voice will enable all Garmin drivers to safely escape the clutches of Were-Rabbits everywhere knowing that they can trust the easy-paced navigation instructions provided by a generally unflustered Wallace.”

Andreas Hecht, founding partner of Spot It Out, distributors of the Wallace & Gromit GPS voice, comments, “It’s great to be able to distribute such an exciting product. There may be wrong trousers up ahead but there will be no more wrong turns made with the trusty voice of Wallace, the ultimate traveling companion.”

The Wallace & Gromit GPS voice is available to download from: http://www8.garmin.com/vehicles/wallaceandgromit and http://shop.spotitout.com/products/wallgrom-voice-garmin for $12.95.

About Aardman
Aardman, based in Bristol (UK) co-founded and run by Peter Lord and David Sproxton, is a world leader in animation. It produces feature films, television series and television commercials for both the domestic and international market. Their multi-award winning productions are novel, entertaining, brilliantly characterised and full of charm that reflects the unique talent, energy and personal commitment of the very special people who make up the Aardman team. The studio’s work is often imitated and yet the company continues to lead the field producing a rare brand of visually stunning and amusing independent and commercials productions.
www.aardman.com

About Spot It Out.
Spot It Out is the world’s first location based publisher of premium Voices and Travel Guides for navigation systems, available in the company`s web store. The company brings lifestyle content from popular shows, publications and experts to mobile devices from well-known brands such as History Channel, Nickelodeon, Wcities and Roadside America, among others. 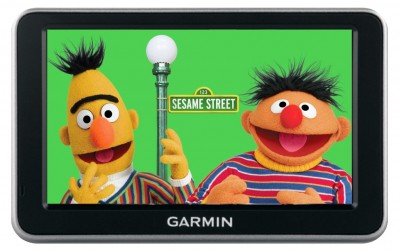 If you’re not a Wallce and Gromit fan, I think you’ll get a laugh out of the entertaining duo from Sesame Street, Bert and Ernie. Here’s the additional details:

The latest characters to lend their voices to Garmin Navigation Systems, Bert and Ernie join the ranks of Darth Vader and Homer Simpson to help guide (and sweep the clouds out of) your way.

For $12.99, the Bert and Ernie GPS voice will add humor and entertainment to your drives with funnies like, “U-turn ahead, Bert. Just me turn? All of us Bert” and “Listen Up, in one quart of a mile, you’ll turn right. Having fun rubber ducky?”.

The Bert & Ernie GPS voice is available for download at http://www8.garmin.com/vehicles/sesamestreet and http://shop.spotitout.com/products/berternie-voice-garmin for $12.95.

Just for extra entertainment value, here’s Bert and Ernie in the studio recording their voices for the GPS…Enjoy