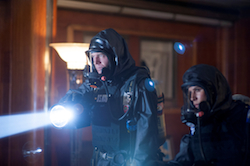 #1 Network in Primetime with Six of the Top 10 Series

And 9.3 Million and Counting for Legends

TNT has won the summer ratings race. With one week left to go, TNT has cemented its place as the summer’s #1 basic cable network in primetime. Propelling the network into first place is its stellar slate of original dramas, with TNT claiming six of basic cable’s Top 10 original series of the summer, including the Top 3: Rizzoli & Isles, Major Crimes and The Last Ship. TNT also claimed four of basic cable’s Top 5 scripted series of the summer with adults 25-54, with The Last Ship in first place.

TNT’s summer dramas have accumulated enormous audience deliveries through the network’s various platforms, including live viewing, DVR playback, set-top VOD and digital on-demand. These more complete and accurate figures show The Last Ship blasting through with 14.4 million viewers, while Rizzoli & Isles is at 13.6 million viewers and Major Crimes has grown to 12.6 million viewers. Newcomer Legends is chalking up big numbers, as well, with its premiere episode rising to 9.3 million viewers and counting.

“We are extremely proud of this victory, which reflects TNT’s re-energized brand and demonstrates the power of TNT’s originals series,” said Michael Wright, president, head of programming for TNT, TBS and Turner Classic Movies (TCM). “This summer, we ventured into new waters with quality genre fare like The Last Ship and Legends, while crowd-pleasing crime-dramas like Rizzoli & Isles and Major Crimes continued to pack ’em in with their best seasons yet. And the epic saga Falling Skies laid the foundation for what is certain to be a spectacular final season next year. This has truly be a summer to remember for TNT.”

TNT has aired a total of 10 scripted dramas this summer, more than any other cable network in history. In addition to rolling out seven returning hits, the network launched three new dramas to great success, with The Last Ship topping the charts as basic cable’s most-watched new series for the year-to-date. TNT has also scored summer success on the unscripted front, as Cold Justice continues to deliver double-digit growth over its winter episodes.

Collectively, TNT’s summer originals are bringing in significantly more viewers than last summer. For the summer-to-date, TNT’s original series are averaging 5.6 million viewers in Live + 7 delivery, a +23% increase over the same time last year. In key demos, this summer’s TNT originals are bringing in +13% more adults 25-54 and +9% more adults 18-49 than last summer.

Below are complete rundowns of the competitive success, multi-platform deliveries and summer finale stories for TNT’s original series.

With Rizzoli& Isles, Major Crimes and The Last Ship leading the pack, TNT is home to six of basic cable’s Top 10 original series this summer, more than any other network.

Murder in the First: 4.5 million viewers

Among adults 18-49, TNT holds three of the Top 5 scripted series this summer:

TNT Series Score Big Audiences through On Demand and Digital

TNT’s summer dramas have accumulated huge audiences through the network’s various platforms, including live viewing, DVR playback, set-top VOD and digital on-demand. The combined audience numbers provide a more complete picture of the number of viewers coming to each show*:

Murder in the First: 9.2 million viewers

TNT’s recent additions to its summer slate have also achieved strong deliveries across the network’s various platforms for their summer launches*:

TNT’s summer success has also driven growth among the network’s digital properties and VOD offerings. TNT On Demand has grown +8% in VOD transactions compared to last summer, due in part to the network’s strategy of making episodes of The Last Ship and Murder in the First available the day after premiere and keeping them available all the way through to the end of the season.

TNT’s YouTube channel has grown by +6% in video views compared to last summer, while the Watch TNT app has delivered +25% more downloads.

* Source: Nielsen P2+ reach for all TEN telecasts through 8/21 (for “Legends,” “Dallas” and “Franklin & Bash”: episode 1 only), 6-min qualifier, Live and DVR + 7 blended, Rentrak VOD total transactions pulled on 8/20, Omniture and Bango digital on-demand starts through 8/20. Gross is a sum of these totals and is not necessarily unduplicated.

TNT is television’s destination for drama. Seen in 101 million households and ranking among cable’s top networks, TNT is home to such original drama series as Rizzoli & Isles, Major Crimes,Falling Skies, The Last Ship, Legends, Murder in the First, Perception, Dallas and Franklin & Bash. TNT’s upcoming slate of original scripted dramas includes The Librarians, Public Morals, Proof and Transporter The Series, which will make its U.S. television debut on the network this fall. TNT also features such dramatic unscripted series as Cold Justice and the upcoming On the Menu and Wake Up Call. In addition, TNT is the cable home to popular dramas like Hawaii Five-0, Castle, The Mentalist, Bones and Supernatural; primetime specials, such as the Screen Actors Guild Awards®; blockbuster movies; and championship sports coverage, including NASCAR, the NBA and the NCAA Division I Men’s Basketball Championship.