For today’s EMExclusive, you are in for a real treat. I got to sit down with the cast of the upcoming comedy The War with Grandpa!

First, I talked to the sibling Peter and Mia Decker, plaed by Oakes Fegley and Laura Marano!

Tell us about your roles in the film since you play brother & sister in the movie!

Oakes Fegley (OF): I think that Peter is one who has a lot of passion and he doesn’t back down easily. And vicariously through all the pranks he obviously plays on his grandfather who is his direct counterpart in the movie. They are butting heads a lot because they are very similar and they both don’t want to back down. They want to take home the crown. That’s what carries the movie.

Absolutely and your role Laura.

Laura Marano (LM):  Mia is your sassy teenage older sister. I’m a younger sister, not an older sister. I feel that I really didn’t necessarily grab that much inspiration from my older sister because she is awesome but I definitely I felt like Mia was a little self-involved. She’s a little in her own world. She’s also at that age where she’s reaching independence and searching for it. She likes this guy. She thinks that she should go out with him. I feel that there’s a lot of kind of fun moments I got to create with Mia.

What was your favorite scene in the film?

LM: You know what there are so many amazing moments that I actually have a screaming match with Uma Thurman in the scene where she catches Russel and me in the first time was probably a highlight for me. That was like a really cool moment on set where I’m like “This is so surreal!” 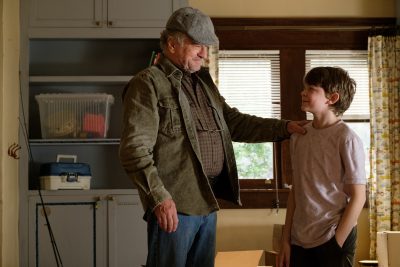 That’s great! And you Oakes…

OF: I would probably go with just some more intimate scenes with Peter and his grandfather. Some of those scene just give him a different energy. Most of the film is them playing pranks on each other and being enemies and having those quieter scenes. Those are also important in showing that respect that Peter and his grandfather have for each other.

Would either of you “go to war” with a sibling or a family member? If so, what would you do?

OF: I am a sibling of two siblings, an older sister and a younger brother. I would say that I’m probably most likely to go to war with my younger brother. I don’t know, there might be a little bit of pranking here and there but I think it would be more of just us talking about you know different things and having different opinions. We have different personalities.

LM: Well when I was younger, Vanessa, my older sister and I completely did not get along. I was so annoying. She was so very exclusive and no inclusive! I wanted to hang out with her because I loved her. Then, when I hit middle school, we were so super close and low key like started writing down compromises. So, we had this thing where I wasn’t allowed in her room if she said the word “Audi Sesame” but that only lasted until 12 midnights of that day. It wasn’t like a forever thing. And things that were really important to us, like we had the compromise before actually we go to full war.

Next, I got to talk to comedian Rob Riggle. He plays the patriarch Arthur Decker in the film!

So tell what it’s like to work with such an amazing cast with Robert De Niro, Uma Thurman, Oakes Fegley and the rest.

It’s exactly as you would imagine would be, it’s fantastic. An unbelievable experience. It’s a legendary cast. These are iconic actors, a super thrill. One of things where you find yourself in a scene and you kind of have to pinch yourself because you like “I’m doing a scene with Uma Thurman ad Robert De Niro, this is actually happening.” It’s very cool to say the least. 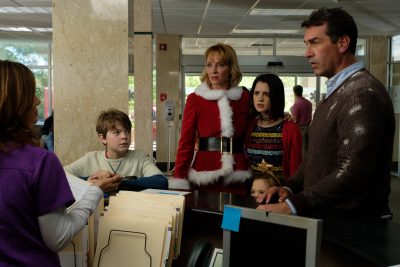 What was your favorite scene in the film?

There’s a lot you know because there were some big production pieces. The Christmas party was a big production piece. You have a lot of stunts going. There was this scene where Robert De Niro has himself dangling from the gutter and it required a big reaction. I don’t want to giveaway too much but there was a lot of fun to be had in this movie.

You’re right, it was definitely so much fun. Would you “go to war” with a sibling or a family member. If so, what would you do?

I was lucky. I never had to go to war. You know, I take that back. My sister and I would in the back seat you know where the arm rest comes down. That was always no man’s land. It was agreed upon, that was DMZ – you can’t go in there. We both had our sides. Of course my sister broke the rules. Never me, never me but my sister would always put her hands in the DMZ would require me to slap it. And she would sink her claws into my arm and would take a chunk out. Then it was on until my dad would do the classic reach back and separate us. You know, that was war that I actually had with family.

How would you describe comedy? Is it in a good place right now especially with the pandemic going on?

It’s really tough because as far as being able to tour and do stand-up and stuff like that I haven’t done stand-up in over ten years but I know a lot of friends who do stand-up and it’s how they make their livelihood. They can’t tour, they can’t be on stage. They can’t have crowds or audiences. So for the last nine to ten months, they have been unable to make a living. It’s really hard on them. They are frustrated, they are scared. Its causing a lot of anxiety because they need make a living and they need to do what they love to do. So I feel bad, I feel bad for them in that way. Also just doing comedy, I think it’s what people need but people get cancelled because they do comedy. Who wants to do that?

What drew you to the roles of Diane and Danny?

Jane Seymour (JS): The cast. Before I ever heard the title, they said De Niro, Cheech & Chris Walken and Uma Thurman. I just went “Wow, this must be worth reading.” When I read it and realize that this was a very successful children’s book, I thought that this is so much fun and what a great fun character. You know that I haven’t played that character before and I loved doing comedy. To work with these icons with these really great actors, I knew it would be amazing. Especially I already Chris Walken from doing Wedding Crashers.

Cheech Marin (CM): I was drawn to the cast. I read through the whole thing especially playing my scenes with Robert De Niro and in the end I don’t get whacked and I’m still there you know. It’s a win-win 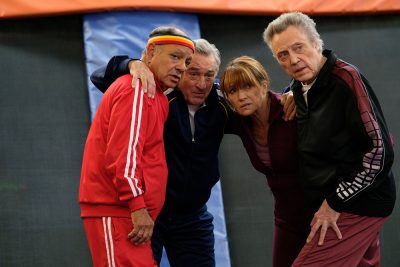 It is a win-win. What was your favorite scene in the film?

CM: I like the dodgeball scene, that was a lot of fun. I like the scene of me and Chris & Robert are walking down the street. We did a bunch of takes and everyone was different. We just kept repeating and trying out new things. It was amazing of how good they were at that. It somebody took the lead and started going off in that whatever tangent, everybody would be listening and all of us would be chip in here. It was just walking and talking, you know that was pretty good.

JS: Well I would have to say the dodgeball because everyone was there and it was just a hysterical scene anyway but for me personally, it was exciting to be one on one with Robert De Niro doing the scene at the cash desk. You know, minimal as that really is. It’s just magic to watch a master at work. You’re there, you meet him, you talk to him if you can offset or once he’s on set and in character. There’s this sparkler, this energy, this focus. He’s actually listens you and he gives. It was everything that I could ever hope for.

How would you describe the film to anyone who has not read the book?

JS: I would say that it is a film that will appeal to all ages. Basically, a grandpa can’t stay in his own home anymore and he’s very sad. He’s not managing things and he’s making lots of mistakes. So he has to live with his family and in so doing, they run out of space so they give the grandson’s room to grandpa. That’s becomes the war. You say that you can’t let your grandpa take your room and ultimately it becomes this ideal, this war. It’s so family loving. It has charm and it come from this real place that you actually cared about all the people who are involved as well as laughing about them.

Thanks to Oakes, Laura, Rob, Jane and Cheech for the amazing interview. If you want some laughs and a good family comedy, check out The War with Grandpa – IN THEATRES This Friday October 9th