Entertainment News for The Rest of Us
DEAN ROGERS
EMExclusives 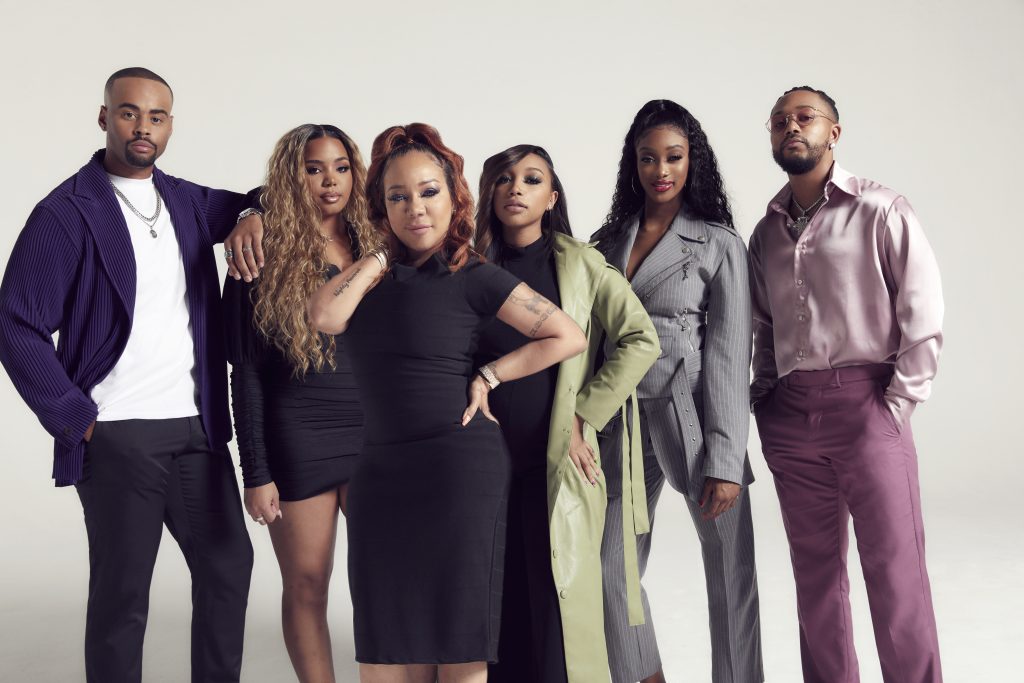 Welcome to the latest edition of THE INTERVUE! For today’s interview, Viewers are tuning in for the newest high energy, live millennial/Gen Z, mixed-gender talk show, THE MIX, where no topic is off-limits. They will relaunch tomorrow Tuesday, October 6, at 10pm ET / 7pm PT on FOX SOUL and will air every Tuesday night!

Here to talk about this new talk show are the hosts of The Mix: Zonnique, Anton Peeples, Jamie DuBose & Jazz Anderson.

Welcome to THE INTERVUE, it’s nice to talk to all four of you! Tell us what The Mix is all about? It’s a new talk show that speaks to the millennial/Gen Z crowd

Anton Peeples (AP): So what’s great about our show is that like you said, it’s a millennial/Gen Z talk show. It final gives young people a voice to be able to talk about anything & everything from sex to politics to Kanye West rants to Trump tweets. There is no subject off-limits. What’s really beautiful about the show is that it has the opinions of both men & women as you rarely see on talk shows. It’s a nighttime talk show, its sexy, it’s fun. It’s a different take on a talk show. It’s a little bit more of a hot night than a morning talk show.

Zonnique (Z): For me, I have been working with my mom for a long time. She is absolutely great to work with. I had to learn how to work with her a little bit. We had some trouble in the beginning but that didn’t mean that me and my mom. You know that I always looked at her as just my mom. So I just got emotional about certain things but now that I am older, I feel that she is very excited about this show. She’s very engaged and everybody has a good relationship with her. It’s really easygoing working with her on this project.

Jazz Anderson (JZ): I would definitely agree with Zonnique. It’s been easy working with her too.  She’s a lot of fun. She’s about the business and getting down to it but at the same time, creating a fun work environment for everybody. So far, I love working with “Tiny”.

Jamie DuBose (JD): I am definitely new to this industry and I feel like Tiny had never made me feel that my opinion is anything less than my other hosts because I am new and younger. She became like a mom for the show and I love that. She is just the sweetest. I could not have imagined working with anyone else with this show.

AP: Just to go off with what everyone has said. Its been an incredible ride working with her. She has been in the game for years. She has been successful at everything she has put her name on from reality shows to the Grammys to music. To be honest, it was an honor working and learning from her. I learned a hell of a lot from her in such a short time of the business. It has been a really beautiful experience. It feels like a family working with her. She has her family in the industry as well. It’s a really beautiful image to see and very inspiring.

Even though the show starts next Tuesday, we will have the first of three Presidential debates tonight. I like to know what do you feel needs to be addressed during the debate and will you be watching. (Editor’s note: This question was asked before the first debate was aired last Tuesday)

JA: I want to see what policies will each candidate bring to the table. I feel that both are saying what is going to do but we haven’t seen any action behind it. We haven’t seen anything being implemented. There is no strategy there. For me, I feel like that knows who I am voting for but at the same time, I want them to give me more clarity on it. What are the very things will they bring to the table for right now, everybody is saying a lot but they are not really showing a lot.

JD: I know that recently that there is evidence of Trump committing tax fraud hasn’t been released to the public. So I definitely hope that this will be brought up and expose Trump for the person he is. I would also like Biden to prove what his actions are and give what he plans to do when he is in office.

AP: So I am so excited to watch the debates. I feel that Biden will beat Trump in the debates. I love the fact that we have a Democratic nominee who can be as polarizing as Trump in terms of going back and forth in a debate. I am happy about that. What I really want Biden to after Trump is that he incited a race war within the United States. I really want him to acknowledge the fact that we know that Trump has delivered racist remarks and racist. I really want him to bring up that fact in the debate tonight.

Z: Just adding on, I feel like everyone said, I want to tune in and see what Biden talks about, to be honest.

Tell us about the auditioning process as far as being selected at the hosts of The Mix as you all come from different walks of life. When did you realize that all you clicked?

AP: Well, we had a full day of auditions. When we auditioned, it feels like a chemistry test and it was right in the middle of the pandemic. So, we couldn’t have everybody in one place at one time. I know Jazz was virtual. She had a computer that was right next to everyone else. It was almost like she was there. Even though the computer, we can see that there was something special about Jazz because she gives us this energy, very vocal and very intelligent.

I remember meeting Jamie and I’m like “This girl has got some fire!” She’s young but she’s very passionate about what she has to say for she could not but swayed. Of course, Zonnique is just a pro. She has been doing this for so long. She knows exactly what she wants to say. She knows a lot about everything and she is just sweet! So all of us were in the auditions all day. It was probably seven or eight hours. We kept switching groups to see what works and what didn’t. So we had another day where we narrowed it down to the five of us including Romeo (Miller). We felt that this was just right. This feels like a flow. This could create something powerful with the five of us. After that, I feel that we knew for when the producers were watching and Tameka agreed with the interviews that we were having. We all were bringing something unique to our platform. It just vibes, it just worked!

If you can pick just one topic to fully delve into with The Mix, what would it be?

JD: Relationships. It would be enough to get all our personalities to deliver a variety of opinions.

JA: For me at a time like this, we need to focus on politics. I feel that at our age we could be the change and make a difference that we can shine a light on those topics. We need to keep them at the forefront for sure.

Z: Well my favorite topic is the relationship topics like Jamie. I would pick relationships for we are definitely having so much fun talking about those types of relationships and everyone has such a different opinion on them. I feel that we haven’t gotten into things that are talked about like abusive relationships. I fell that we can really speak about the serious stuff that happens in those relationships.

AP: I feel because of right now because it’s so timely, we got to talk about the political topics.

I love politics and most specifically the election that’s coming up and giving the notoriety to the importance of voting. Getting out there to register to vote. It’s super important especially for the younger demographic. What’s a better way than our platform to talk about the ways to vote? Most of our watchers are age 17 to 35. It’s the perfect age to talk about it.

What can we look forward to with The Mix?

AP: You can look forward to a whole lot of surprises. We have a theme song. We have anew opening segment for the show, it’s really fly. We have some coolest guests which I can’t talk about yet. We have been gone for four weeks and now we are bursting at the seams ready to talk about all the new hot, craziest stuff that’s been going on this last month and a lot has been happening this last month. You’ll have to tune in to see us deliver that same high energy we delivered the first four weeks.

Wow, that is deep! Jazz, I don’t how can you top that but you may have to try.

JA: I know! You know, I just want the year to end on a brighter note. You know that a lot of things this year has been very disheartening and dark. To piggyback on Jamie, I would say appreciate life. Something that was very important for me this year is because we are in the pandemic and through the quarantine, I was able to find myself. So I hope that everyone can do that because we are all to ourselves at this time. Hopefully, everyone can find themselves this year, and going through next year know who they are and have that sense of clarity.

AP: I am hoping that at the end of 2020 that this coronavirus is finally controlled in America. I am hoping that the deaths go down and that we are closer to a vaccine so we can get back to the new normal. For obviously, we are not going back to the way things used to be.

Hopefully, we can all come together for there has been so much divided this year. It felt like a war between two races and things are going so left. So, I really hope that we can come together and find that we have more in common than we have different.

Z: I feel that this year was such a tragic one I hope that in the end, we have some growth from all the things that we have been through this year, and next year that we get a restart.

Be sure to check out The Mix every Tuesday night at 10pm EST/7pm PST on FOX Soul. Anyone can view THE MIX on Fox Soul, which is available via iOS, Android, Apple TV, FireTV, YouTube/FoxSoul, Samsung Plus, Fox Now, Roku, Tubi, Xumo, CaffeineTV or on the web at foxsoul.tv.

If you want to follow the hosts on Social Media:

Intelligence tests are so fooled by study that they miss the most rastgele seks sohbeti important aspect of human efficiency: the mind to think in ways contrary to those around them, which comes not from intelligence but from a path of thinking and from condition.
← Previous Post
Next Post →