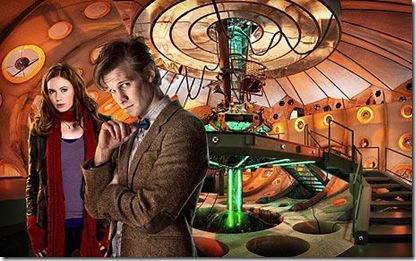 The teaser/first act of The Eleventh Hour references ET just a bit, but without Reese’s Pieces. You’ll know what I mean when you watch it. It has that fairytale feel – heightened colors, swirly music and more than a little well placed [and extremely well-timed] silliness, and a bit of underlying darkness. Even though he’s not quite settled into himself, The Doctor is still The Doctor. He leaves with a promise of returning…

In a unique approach, The Doctor and his newest companion, Amy Pond [Karen Gillan], get off to a rocky start. Something about a broken promise… Then there’s someone/thing referred to as Prisoner Zero; a hospital ward full of comatose patients who start calling for a doctor; a big eye [has Steven Moffatt read Max Ehrlich’s sci-fi classic, The Big Eye?], and a failing sonic screwdriver – with only twenty minutes to save the world! Worse, the TARDIS hasn’t finished repairing itself and The Doctor is locked out!

Doctor Who’s new showrunner, the aforementioned Steven Moffatt, has pulled out all the stops for the show’s fifth season premiere. The new opening credits are infinitely better than the previous ones and the new arrangement of the theme music is an unusual mix of the orchestral of previous seasons with a bit of electronica. The first ep gives us a Doctor who is a work in progress; a companion who isn’t exactly what she seems; a strange and wonderfully evil new villain, and the mix of drama and humor that make Doctor Who a uniquely British – but also uniquely accessible – program. 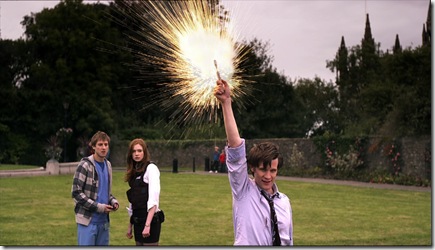 Matt Smith is the youngest actor to play The Doctor, but he’s nailed it! He seems a bit sillier than some of the previous Doctors at first [hello? He’s regenerating!] – and an element of that stays with him throughout – but he can, and does, get serious when he needs to. He also shows that scary side when aliens might be planning to… I don’t know… incinerate the Earth…?

Karen Gillan, Amy Pond, is a relative newcomer [less than twenty hours of screen time prior to Doctor Who] but she matches Smith emotion for emotion, action for action – and she’s even more feisty and independent than Sarah Jane Smith.

Smith and Gillan have chemistry to match the Tennant/Piper pairing – fanfic writers will most likely have a field day with them – and they have a weird, but complementary, sense of timing.

The Eleventh Hour boasts some very nice special effects, too. The new villain; the alien starship design; the gorgeous TARDIS [which continues to integrate antique and futuristic components in an odd but pleasing configuration] – all work together to make the new doctor’s premiere a terrific bit of fun.

If, at times, the show seems to take on a fairytale-like quality [the original, scary as $#!+ Brothers Grimm stuff], it’s fair to note that Moffatt thinks of the show as a fairytale. To paraphrase him, fairytales are not entertainment; they are warnings to children that there are things out there that will eat them. More than any previous incarnation, Matt Smith’s Doctor captures that extra bit of menace.

The post ep teaser is for the whole season – and there’s a lot of cool stuff ahead! Doctor Who: The Eleventh Hour is the best ninety minutes of television I’ve seen so far this year. The Doctor still rocks!

But it is a Good Thing he swears never to utter the phrase, Who’ da man! ever again.

Next week: The Beast Below – the ep in which Amy dazzles The Doctor and earns her place in the TARDIS.