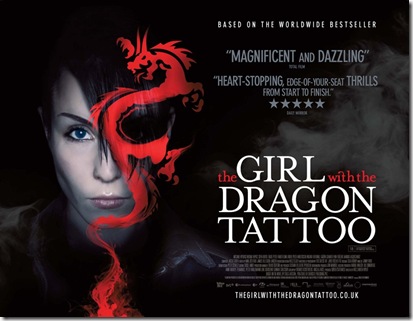 Like the novel, the film develops at an almost leisurely pace, beginning with Henrik Vanger [Harriet’s uncle, played by Sven-Bertil Taube] opening a parcel to discover a pressed flower in a basic frame and winding up with a tag that ties together loose ends that pull the film together without exactly giving it a tidy ending. It’s the kind of movie where you sit for through it so engrossed that you never finish your drink [I had most of mine left when the credits began to roll].

The script, by Nicolaj Arcel and Rasmus Heisterberg, dispenses with a lot of the novel’s exposition and cuts at least two relationships completely. Even after pruning, the heart of the story is complex enough that it not only fills the film’s two-and-a-half hours, it never feels either overly stuffed, or too thin. 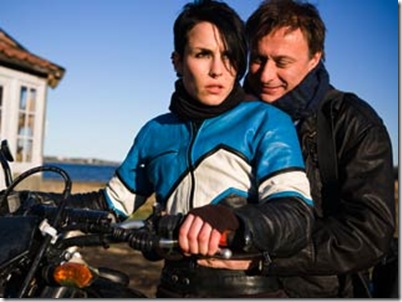 We get enough of an understanding of Lisbeth’s ward-of-the-state standing that what happens to her makes a horrific kind of sense [as does her retaliation], and enough of a feel for Blomkvist that we understand his libel conviction makes none. We see the two working, almost supernaturally, in tandem before they even meet and when they do, again, it makes perfect sense.

Niels Arden Oplev takes the multiple threads of the script and gives each precisely the weight it requires. He also composes his shots in a way that Sweden’s natural beauty contrasts with the ugliness of the film’s darker events in a way that is breathtaking.

Both Nyqvist and Rapace are particularly fine – he as the middle-aged, not unattractive Blomkvist; she as the boyish, fiercely independent, goth hacker. They make me long to see the second and third instalments in the series – and dread the inevitable American remakes.

Don’t let the fact that The Girl with the Dragon Tattoo is in Swedish, with English subtitles, dissuade you from seeing this terrific film.

One thought on “MOVIE REVIEW: The Girl with the Dragon Tattoo – Multi-Layered Thriller Sneaks Up on You!”