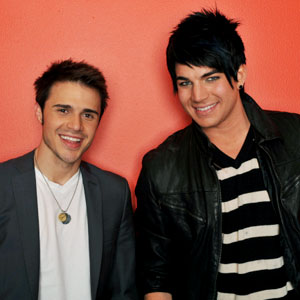 Tonight it all comes to an end; well, other than tomorrow night’s results show. The last Idol showdown and it’s all come down to the understated, no personality, weak voice Kris Allen, to the over the top, gay, Broadway screamer Adam Lambert. My money and everyone’s money is on Lambert moon walking all over the milk toast. But not so fast, the American public may shock us all and give it to Kris because they are tired of the Judges over pimping Adam.

Like I’ve said every week for the last 12 weeks, Adam isn’t good – he CAN’T sing! What he has is CHARISMA; he oozes it. I say give the Judges what they want I really don’t see Adam having a long-term successful pop career. Yes, he’ll be hot the first year, but I can’t imagine that screeching he does will have long-term viability outside of Broadway or Vegas. I can see him becoming really huge in those two forums but as a “Rock Star?” No way. Kris, I don’t know where he goes either or even what type of artist he would be. But despite my criticisms, I admire Kris, this is like the race between the Tortoise and the Hare. Slowly but surely Kris has quietly made it to the top 2 out of nowhere and despite all the odds. You have to admire that.

Of course I’m going to watch tonight, can’t help myself, but I don’t know if I’ll have the energy to do a Re-Cap unless something so over the top bad or good happens. I will predict that at some point tonight, Simon will tell Adam “He just won Idol with that performance,” and no matter what poor schlep Kris does, the Judges won’t’ like it. Well, they’ll try and be even handed and will rave on one Kris performance and slam the other.