Entertainment News for The Rest of Us
Liana Bekakos
Conventions, News, Television
3 Comments 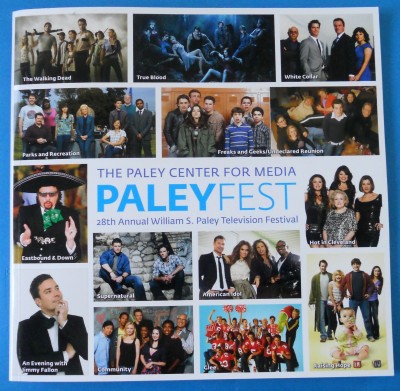 I had the honor and pleasure of attending the Supernatural panel at the twenty-eighth annual William S. Paley Television Festival in Beverly Hills, which has been in full swing since March 4 and will continue until March 17.  The shows featured at this year’s festival are “The Walking Dead”, “True Blood”, “White Collar”, Parks and Recreation”, “Freaks and Geeks”, “Undeclared”, Eastbound & Down”, “An Evening with Jimmy Fallon”, “Community”, American Idol”, “Hot in Cleveland”, “Glee”, “Raising Hope”, and of course “Supernatural.” Thanks to some copious notetaking, I hope to present you with a (mostly) accurate transcript of this wonderful panel.  Be forewarned that there WILL be some spoilers covering the rest of the season.

The Paley Center for Media believes that everything presented on radio and television has value.  And as such, the Center has an extensive archive of all things radio and television from as far back to the past, through to the present.  It was very appropriate, not only to the Paley Center but also to Supernatural, that they would pull an old commercial dating back from the late 1950s urging us to “See the USA, in your Chevrolet!” in order to open the afternoon festivities.

This first report will cover the introductory elements, as well as a detailed description of the preview of the much-anticipated western-themed episode.

The first person to start the introductions was Debra Birnbaum, Editor-in-Chief of TV Guide Magazine.  She explained how, for the first time this year, TV Guide allowed the fans to choose the cover of an issue through an online voting system.  After over five million votes recorded, the winner was Supernatural!  At first the votes had reached 100,000 and the editors all thought ‘it was pretty cool.’  Then the votes hit one million and they thought ‘that was amazing.’  The final vote count was beyond belief.

Another poll was held recently, The Fan Favorites Awards, the voting on which just closed.  Even though the results will not come out until mid-April, Debra stated, “I don’t want to give anything away, but let’s just say I was at a photoshoot with a couple of the guys backstage.”  Appropriately, the theater erupted in cheers and Debra praised the guys on their good looks.  Actually, her exact words were ‘those guys are hot!’  Thank you, Sam and Dean for saving the world each week.

Debra then introduced the moderator for the event, Maureen Ryan, the lead critic for AOL’s TV Squad and a huge fan of Supernatural.  A small trip of the tongue labeled Maureen as lead critic for TV Guide, but that was followed by a quick correction (and apology to Matt Roush). 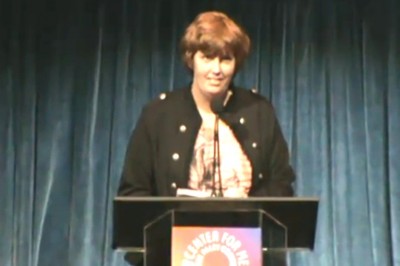 Despite some initial nerves, Maureen kept her introduction short and instead of some long narrative she stated that a certain song kept occurring in her thoughts as she was preparing for this program.  It is a classic rock song whose lyrics seem very appropriate to the challenges faced by the Winchesters.  Without making any attempt to sing, Maureen read the lyrics to Pink Floyd’s “Wish You Were Here.”  And with lyrics that include mentions of Heaven and Hell, pain, heroes, ghosts, cages and souls, it was indeed ideal for a show that we all know and obsess over.  And I may have imagined it a bit, but I am pretty sure that our marvelous moderator may have gotten a bit choked up thinking about the pain, the heartbreak, and the brothers as two lost souls. 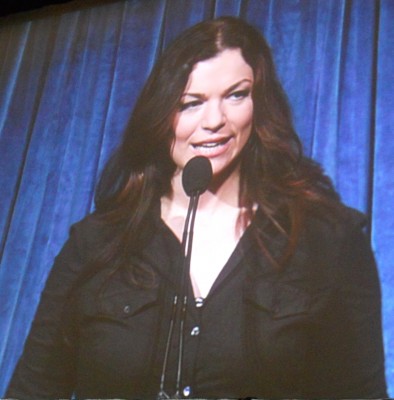 This segued into the introduction of Executive Producer Sera Gamble, who took over showrunner duties in season six.  She thanked the fans for continuing to vote for Supernatural in all the polls and introduced a montage put together by the amazing post-production team.  The video contained highlights of the season so far and “a couple of little treats” which referred to extended footage of outtakes from The French Mistake.  Sera stated that this is one of her favorite episodes of the entire series “in which Jared and Jensen do some of their best and worst acting simultaneously.”  Another one of the treats was a scene from the much-anticipated Western-themed episode, which will air when the series returns April 15 following this spring hiatus – or as fans lovingly refer to it: hellatus.  The montage was set to the song “Are You Man Enough” and began with the customary “The Road So Far.”  It featured scenes from the season to date and at the end included extended takes of the ‘bad acting’ scene from The French Mistake. The “Soon” teaser began the scenes from the Western episode.  (My apologies for the quality, but these are pictures taken of the big screen.)

The preview clip opens with an angled aerial view featuring typical buildings of the Old West in the background, a dirt road in the middle, and a hangman’s noose hanging to the right of our screen, from which this vantage point is shown.  The screech of a falcon is heard from overhead. The location is “Sunrise, Wyoming, March 5, 1861.”  The background music is without a doubt, old-time-western movie.

We see the first man from the knees down as he walks into the scene, complete with long duster coat and spurs on the boots.  A second pair of legs walks on, jeans tucked in the spurless boots, as an observer peaks out from behind a curtain.  The vantage point from the noose lets us see that this is heading towards the standard shoot-out, seen in so many spaghetti Westerns.  The coats are flipped back as the men prepare for the quick-draw.  A close-up of the first man shows concentration.  Both mens’ hands are poised by their guns.  We see the Sheriff’s Star on the second man, and as the camera pans up to his face, we see that it is Dean Winchester.  [the theater erupts in squeals and screams].  The time on the clock is a couple of minutes shy of high noon.  As the men quickly draw and shoot, the screen fades to black.  The teaser then goes to the title card with the edges burning like paper, and the music and logo font reminiscent of “Bonanza,” before it shatters in the manner of the season six title card.

The next part of the preview takes us to Bobby’s house and we see the bag of gold that was collected by the dragons and found by the brothers in episode 6×12 “Like a Virgin”. Sam and Dean come down the stairs, Sam dressed in a white shirt adorned with Western-style embroidery just below the shoulders.  With indignation, Sam proclaims that they look ridiculous. Dean is in full gear, complete with cowboy hat and sarape.

“Is it customary to wear a blanket,” asks Castiel standing behind Bobby.

Dean, obviously proud of his wardrobe choice responds, “It’s a sarape, and yes it’s uh… never mind let’s just go.”  He cuts himself short as he realizes the others aren’t as appreciative of his sarape as much as he is.  Seeing the gold he asks “What’s this?”

Castiel then tells them, “I’ll send you back to March 4th.  That should be enough time to find the Colt.  And this Phoenix creature.”

Dean zips up the bag filled with gold and his regular gun.  “Alright, well, see you at high noon tomorrow.”  He gives a click of his tongue and a wink of his left eye.

Castiel touches their foreheads and they are zapped back to the past. They examine their surroundings as a small sign states “Sunrise, Wyo.”  While Sam seems resigned, Dean appears to be in awe, like a kid in a candy store. “Oh, now we’re talking!”

We cut back to Bobby’s place where Castiel states, “I have to go.”

“What about getting the boys back?”

“I’ll pray for all of us,” Bobby states with a concerned look as he sets his timer for 24 hours.

As we cut back to Sam and Dean, Sam is also setting his watch for 24 hours. “Alright, let’s go find Samuel Colt.”

“Maybe we should go find a saloon first, see what we can get from the locals.”

“Sure, whatever you think.”

Sam puts on his black cowboy hat, and quickly manages to step in a gross, but common ‘item’ left by horses on those western paths.

“You know what that is?” Dean asks, almost pleased at the discovery.

Holding on to Dean’s shoulder for balance as he tries to shake off the offending material Sam states, “Yeah, it’s horsesh—”

“It’s authenticity!”  Dean cuts him off.  The brothers continue walking into the town as Sam struggles to shake the, um, ‘authenticity’ off his boots.  And this is where the preview ends, leaving us yearning for more and having to wait much too long with spring hellatus.

Maureen asked the audience if they were excited to “go West with the Winchesters” at which point the theater erupted in appropriate cheers.  The panelists then came on stage (to often ear-shattering screams and cheers) with Executive Producer and Writer Ben Edlund leading the way, followed by Jim Beaver, Misha Collins, Jensen Ackles, Jared Padalecki (hi-fiving everyone as if he hadn’t seen them in ages!), Sera Gamble and Eric Kripke, the Creator and original Executive Producer.

Maureen began the questions to the panel by asking about the meta episode “The French Mistake”, from which we had just seen some hilarious outtakes.

MAUREEN RYAN: We all viewed the outtakes from The French Mistake.  What was the reaction in the room when the idea was first pitched? Where did it come from?

BEN EDLUND:  It started from the discussion about leaping into a movie, and out of a movie, something along those lines.  It crystallized and exploded when [pointing to Eric] you, Kripke, said ‘what about if it were Jared and Jensen?’  It was just such a great, mind-breaking, nightmare thought.  I was immediately on board, I thought it was great.  And I think that Sera was there too.  So it became the challenge of how it could possibly all work.  It became a delicious puzzle for us all.  And you guys watched it and enjoyed it.

MAUREEN: Was this going too far in breaking the fourth wall?  You’re just not breaking that fourth wall, you’re blowing it up and exploding it.

ERIC KRIPKE:  I’d say that happened daily! There were discussions–

BEN:  Calls from the legal department…

ERIC:  I just have to say this about the legal department. “We’re not sure, we’re checking right now, but we’re not sure you’re allowed to depict the behind-the-scenes of a CW show.” And we were like, ‘WE’RE a CW show. How many behind-the-scenes are there?’  “Well, we’ll see, and everyone has to sign releases.”  And every day there were (questions) and wondering if we were ever going to recover from pulling back the curtain in that regard.  But what I said to Sera and Bob (Singer) at one point when we were having these discussions was that ‘guys we are in the sixth season of a show that at this point the network basically lets us do basically whatever the hell we want.  None of us in our careers will ever be in a situation where we would be able to pull this off, so that’s why we have to do it.