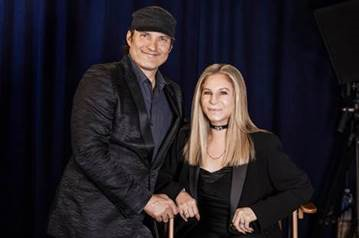 Austin, TX – In an era where female filmmakers are leading the charge in having their stories heard and changing the face of Hollywood, El Rey Founder and Chairman Robert Rodriguez sits down with one of the most legendary pioneering women in film, Barbra Streisand. The special airs Monday, November 26th on El Rey Network beginning at 8pm ET.

Rodriguez and Streisand discuss her journey from actress/singer to director/producer and her experience breaking through the barrier of Hollywood’s “boys club.” Streisand reflects on her first directing role on the 1983 film Yentl and says, “I was so fortunate to work in England as a director for the first time. It was so smooth and they were so supportive, because they had no misogynistic feelings – they had a queen, Margaret Thatcher was the prime minister at the time… and whatever I wanted to do they would say… ‘if that’s what you see, we will give that to you.’”

“In my family growing up, there simply was no bigger star than Barbra. She was a constant source of inspiration and entertainment,” said Robert Rodriguez, Founder and Chairman of El Rey Network. She empowers everyone, but especially minorities and women or anyone who feels they are on the outside looking in. She broke through with relentless determination and hard work. No one has ever come close to her level of talent and accomplishments in so many different areas, and no one ever will.”

About Barbra Streisand
Barbra Streisand is one of the most prolific and respected figures in the entertainment industry. An actress, singer, writer, director, producer, composer, designer, author, photographer and activist, Streisand is the only artist ever to receive Oscar, Tony, Emmy, Grammy, Directors Guild of America, Golden Globe, National Medal of Arts and Peabody Awards and France’s Légion d’Honneur as well as the American Film Institute’s Lifetime Achievement Award. She is also the first female film director to receive the Kennedy Center Honors. In 2015, President Barack Obama presented her with the highest civilian honor the United States bestows, the Presidential Medal of Freedom. She won Oscars for both Best Actress (Funny Girl) and Best Original Song (for her composition of “Evergreen” from A Star Is Born) which has since become a standard. She was also nominated for Best Actress for “The Way We Were.” The three films she directed received 14 Oscar nominations and 13 Golden Globe nominations. Streisand is the only recording artist in history to achieve a #1 Album in six consecutive decades. She has recorded 52 gold, 31 platinum and 13 multi-platinum albums in her career. She is the only woman to make the All-Time Top 10 Best Selling Artists list. Streisand has had 34 albums make the Top 10 on the US charts, the only female artist to have achieved this milestone, tying her with Frank Sinatra. She is also the female artist with the most number one albums in Billboard’s history. Her latest release Walls is a passionate collection that chronicles her feelings, concerns and hopes about the times we live in. It’s her first album of primarily new songs, several of which she wrote, since 2005.

About The Director’s Chair
“The Director’s Chair” is a series of specials featuring the industry’s most cutting edge directors as they engage in a revealing and unexpected exchange about the world of filmmaking. The series provides access to one-on-one interviews between Robert Rodriguez and some of cinema’s most iconic filmmakers. Past guests have included John Carpenter, Francis Ford Coppola, Michael Mann, George Miller, Guillermo del Toro, Robert Zemeckis and Quentin Tarantino.