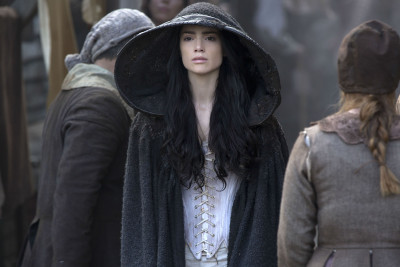 Salem (WGN America, Sundays, 10/9C) has, over the course of its two seasons, been about many things – political expedience, the price of love (and hate), and even the nature of good and evil. Mostly, though, it’s about the love of parents for their child – and the way that might interfere from the conquest of the New World.

The most recent example of political expedience has to be Magistrate Hawthorn’s (Jeremy Crutchley) alignment with Countess Marburg (Lucy Lawless) – an alliance that will certainly come back to bite him (he’s so busy looking for ways to gain and hold power that he is blind to the possibility that he might be maneuvering himself into exactly the wrong place at the wrong time).

The price of love has already caused Mary Sibley (Janet Montgomery) to balk at letting her son, John (Oliver Bell – one of the best of the latest crop of Creepy Kiddies), become the housing for the Dark Lord thereby bringing her low – hanging in the stocks after being charged with adultery and fornication. 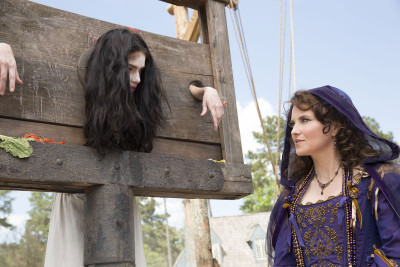 Countess Marburg, the earthly personification of evil commits acts of treachery, deceit and more – yet seems thwarted at every turn despite her power, and her son, Sebastian (Joe Doyle) seems prepared to betray her given enough incentive. And poor little John is about to have a very bad day.

On Earth As In Hell is the title of this week’s episode and it certainly fits – John Alden (Shane West) sees what has possessed his son (and has an unnerving encounter with the countess); Cotton Mather (Seth Gabel) is the doubt-plagued would be exorcist trying to rid little John of his unwanted guest; Isaac (Iddo Goldberg) has found his beloved Dollie and calls the townspeople out for their hypocrisy – winding up in the stocks for it.

All the while, the comet has arrived and the needs of the ritual are causing a certain lack of caution on some fronts – and unexpected aid in others (note a conversation between Mary and Anne Hale…).

With three episodes ‘til Salem’s second season concludes, we are getting a lot of arcs coming together and we get to see the shadow of the Dark Lord’s power – even before the ritual, he does show off a wee bit. 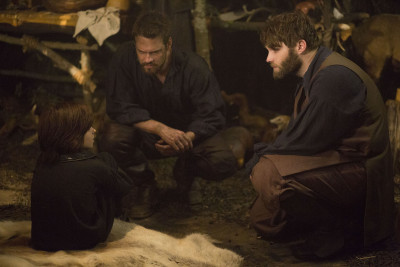 Performance-wise, Crutchley’s snake oil salesman of a magistrate remains fun (especially since we know he has no clue as to what’s really going on in Salem); Lawless continues to project levels of icy calm and rage (sometimes both simultaneously), but never feeling more malevolent than when she seems pleased; Gabel’s very conflicted Cotton (even as he prepares for little John’s exorcism, he learns Mary’s true nature), and Doyle continues to project all manner of menace behind Sebastian’s seeming affability.

Montgomery makes Mary’s desperation palpable – when she says she’ll do anything to prevent John’s sacrifice, we know she means it (even when Sebastian seems to persuade her not to kill herself). When she and Anne talk, she persuades us that Mary is fighting her despair and that it’s not just Anne’s pep talk that brings her back from the brink.

The script, by Joe Menosky and Adam Simon, is filled with little details that add creepiness even in broad daylight – and director Nick Copus is full value for giving each exactly enough time to achieve full impact.

On Earth as in Hell sets the stage for a season-ending blowout of epic proportions – and sets a high bar for the season’s final two episodes to equal.