Entertainment News for The Rest of Us
Sheldon Wiebe
Salem

After this week there remains but one episode of Salem’s (WGN America, Sundays, 10/9C) second season, so it’s only right that everything should lead up to best cliffhanger moment of the season to date (yes, better even than when the Devil himself spoke to Cotton Mather and John Alden  through young John).

Thanks to the Countess Marburg, Mary Sibley’s plans have gone awry and her command of Salem has become a desperate bid to save her son’s life. Now we see how the endgame shapes up. It ain’t pretty…

After time in the stocks, Isaac (Iddo Goldberg) finds himself being freed by Hawthorne (Jeremy Crutchley) and praised for being a truthteller – and abrupt about face from last week’s episode, but watching the shrewd magistrate’s face it seems clear that he’s not doing this out of the goodness of his heart.

Meanwhile, Ann Hale (Tamzin Merchant) is spiriting young John (Oliver Bell) to safety and Cotton (Seth Gabel) is patching up the badly wounded John Alden (Shane West). The Countess is also makes another move with dual purpose by confronting Ann, while Mary seeks to rouse the backing of the elders of the Essex witches. 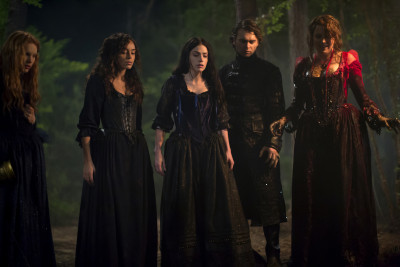 Mercy (Elise Eberle) has a moment to gloat over Mary’s fallen status – and we get to see just how gullible and wrong-headed she remains. We even come back to Tituba (Ashley Madekwe), who has a role to play in turning the course of events in a very specific way.

Midnight Never Come is a fitting title for the penultimate episode of Salem’s second season as midnight is when all Mary’s hopes are to be shattered – and the Great Consecration is to take place.

Donna Thorland and Adam Simon have scripted an episode that crackles with energy and brings about new revelations of a most unexpected nature. There are characters we’ll never see the same way again (and some we may not see again, at all – if Mary’s suppositions are correct).

And then there’s that cliffhanger… Oh, my!

Alex Zakrewski brings a bit of muscle to his direction – without sacrificing any of Salem’s signature tone, he amps up the character beats to where they feel like action beats. The result is an episode that almost vibrates with tension.

Now all the players have made their plays and we can only wait for the season finale to see how things shake out. That should be dark, deeply disturbing fun!