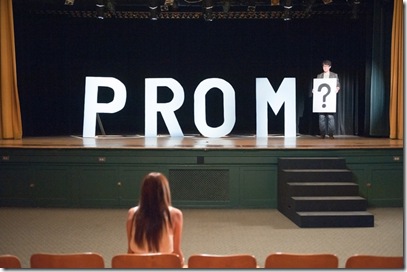 In Prom, Walt Disney Studios has created a lively, reasonably smart teen film that won’t insult the intelligence of any adults who should happen on it. Sure, it postulates a truly mythical version of high school and prom, but movies are all about the imagination and the Disneyverse lives there.

According to Nova [Aimee Teagarden], Prom is the one time in the four years of high school that it doesn’t matter if you’re a jock, stoner, geek, or whatever. Class president/valedictorian/Georgetown scholarship winner Nova has spent the last several weeks heading up the group of students who put together an impressive array of decorations for prom.

When those decorations are destroyed in a fire – inadvertently caused by another student who trying to make a grand romantic gesture for his girlfriend – she finds herself without help on their reconstruction with only three weeks until the big night.

Enter Jesse [Thomas McDonell], the school’s bad boy [he has long hair and rides a motorcycle] who has cut his last class on Mondays for the last four weeks. Oh yeah, and he got into a fight in the cafeteria. His punishment for his ‘bad’ behavior is that he must help Nova with the prom decorations or the principal [Jere Burns] won’t let him graduate.

Jesse’s thoughts on the whole prom thing are diametrically opposed to Nova’s, so you just know they’ll wind up together, but the path to their potential couplehood is fraught with obstacles. Teagarden and McDonell bring such conviction to their roles that they make the characters’ journey completely believable [if there’s any justice, they’ll enjoy long and illustrious careers] – but where Prom really shines in giving us glimpses into other characters’ lives.

Prom king and queen-to-be, Tyler [DeVaughn Nixon] and Jordan [Kylie Bunbury] are not as tight as you might expect – the grand gesture that accidentally burns up the prom decorations are his fault, and she found another girl’s earring in his car.

Justin [Jared Kusnitz] and Mei [Yin Chang] have been a couple since before high school, but his tendency to make plans for the both of them has her afraid to tell him something big. Lucas [Nolan Sotillo] has a crush on his lab partner, Simone [Danielle Campbell] but hasn’t had the nerve to ask her out, instead spending most of his spare time with best friend Corey [Cameron Monaghan] debating ludicrous subjects and listening to an obscure rock band. Naturally, Simone has a secret, just to complicate things further.

Then there’s Lloyd [Nicholas Braun], a slightly goofier, taller, ganglier version of the basic John Cusack kind of character, who hasn’t even tried to ask anyone to prom because he’s been too shy – and now that he’s finally decided to do something, it’s too late. Braun could definitely have a solid career of the sort that Cusack has had. He’s that good in what could’ve been a throwaway part.

So, lots of stuff going on. Not all of it surprising, but most of it heartfelt and delivered with a surprising amount of panache. The montage of clever ways that the guys ask their girlfriends to prom – and the montage of ways that Lloyd screws up his efforts – are especially noteworthy, panache-wise.

Although Prom is a kind of idealized version of high school, and the basic plot arcs are familiar, the pacing, performances and overall vibe are so genuinely warm and natural that it doesn’t feel like the cliché fest it could have been in other hands. The Katie Welch script gives moments that might be purely cheap gags unexpected emotional context and Joe Nussbaum’s direction is sure and far less manipulative than you’d expect.

When I first saw the trailer for Prom, my first thought was that it looked like High School Musical – minus the musical. Which wouldn’t have been a bad thing – the High School Musical movies were pretty underrated. Plus, there’s a killer soundtrack [something you don’t really recognize until you see the impressive list of songs in the closing credits].

Prom is a safe bet for quality family entertainment because it doesn’t – quite – play it safe.