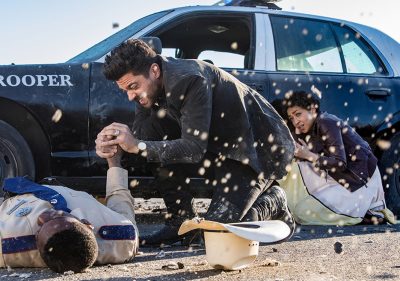 Instead of sharing the backstory as a series of flashbacks – which would have meant hitting the road right off the bat – the series gave us the necessary backstory over its first season. This served two purposes: it allowed for its audience to get to know the characters before they hit the road (where we’d have had to learn about them in a different, probably more disjointed way), and it allowed for fewer location shoots, keeping the budget down while finding out if an audience would cotton to the show’s trio of (very unusual) characters. 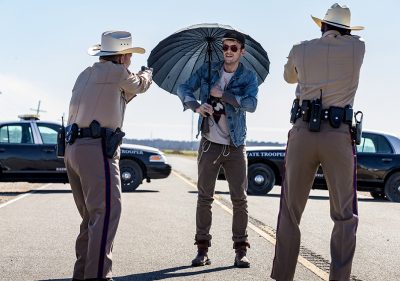 Preacher: On the Road – Cassidy (Joseph Gilgun) – Photo by Skip Bolen/Courtesy of AMC.

Season two opens up on the road, where Jesse (Dominic Cooper, Agent Carter), Tulip (Ruth Negga, Loving) and Cass (Joseph Gilgun, Misfits) run into problems right away – almost out of gas, they wind up in a police chase before finding out that the Saint of Killers (Graham McTavish, Outlander) is after them.

The second season premiere is filled with quick reverses (the trio’s open of a song); things that are not what they seem (a girl in a cage in a garage; God’s reason for visiting a particular place of business), and the inexorability of death (see also: the Saint of Killers). 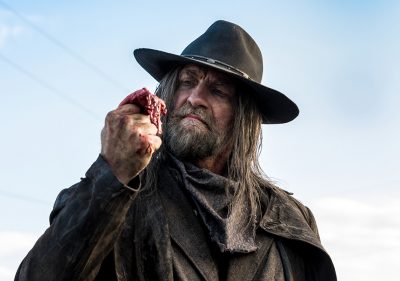 Preacher: On the Road – The Saint of Killers (Graham McTavish) – Photo by Skip Bolen/Courtesy of AMC.

It’s a fast-paced hour that makes seamless transitions from comedy to drama; never lacks wit, and firmly establishes the show’s transition to its road trip identity – at last reaching the point from which the comic opens.

There’s an interesting dynamic building between Jesse and Tulip as they become an item again – he’s quick to lean on Genesis (the god-like he possesses to compel people to do as he says), while she thinks it’s creepy and lazy.

Their debate over its use, while questioning the manager of a strip club, is a true delight.

Of course there’s the violence and nastiness of the comic that continues to be translated beautifully to the series, too: note the unorthodox siphon substitute for gassing up Tulip’s care when gunfire breaks out in an early sequence. 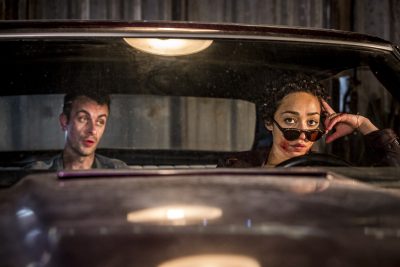 Cass continues to be unorthodox comic relief, too. His efforts to remain untouched by the sun during the police encounter – and the unnerving response by one particular cop – produce some very dramatic humor.

Cooper’s Jesse remains earnest and volatile – and quick to look for the easy way; Negga’s Tulip remains wild and free-spirited, but willing to question when necessary; Gilgun’s Cass is the heart of most of the show’s comic sensibility, but also contributes an interesting balance of intelligence and stupidity.

Overall, On the Road moves like a well-tuned automobile. Goldberg and Rogen are so thoroughly on top of the material that the ep hits every dramatic beat it needs to hit squarely and the wit and humor arise naturally from the ep’s flow.

Preacher is back – and even better than before!