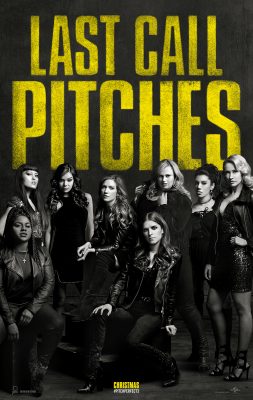 After the two delightful bits of froth that were the first two Pitch Perfect movies, the third in the series finds the Bellas out in the real world after graduation – and and finding real life to be a lot less fun than the aca-awesome days in college.

The teaser trailer for Pitch Perfect 3 offers a look at how the former Bellas choose to deal with that question – and it looks like an intriguing variation on what has gone before.

In cinemas this Christmas.

Anna Kendrick and Rebel Wilson headline the returning cast of Pitch Perfect 3, the follow-up to 2015’s blockbuster hit that took the honor of highest-grossing live-action movie-musical opening of all time. The eagerly awaited next chapter is led by series producers Paul Brooks of Gold Circle Entertainment and Max Handelman & Elizabeth Banks of Brownstone Productions. The film will be directed by Trish Sie (Step Up All In).