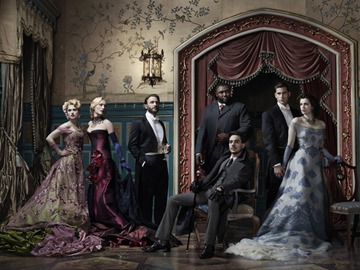 This week’s premiere of Dracula (NBC, Fridays, 10/9C) takes the classic vampire tale and twists it in all sorts of unexpected directions. For starters, everyone’s favorite vampire hunter is actually responsible for reviving the undead former Vlad the Impaler. Then there’s Vlad’s secret identity and involvement with… science! It’s kind of like Bram Stoker collaborating with H.G. Wells or Jules Verne – unlikely, but sort of interesting.

Dracula opens with the vampire (Jonathan Rhys Meyers) being revived, in bloody fashion, by Abraham Van Helsing (Thomas Kretschman) – then shifts to London in 1891, where a party being held by wealthy American Alexander Grayson brings together the characters from Stoker’s novel – though they are not exactly as he wrote them.

Grayson, for example, is actually Dracula and the party is to celebrate his technological advancement on Tesla’s theories of free electromagnetic power generated by the planet itself. Present are Jonathan Harker (Oliver Jackson-Cohen) – a struggling journalist; his fiancée, Mina Murray (Jessica De Gouw) – a medical student aiming to be the country’s first female physician (and a dead ringer for Dracula’s dead wife); Mina’s best friend, Lucy Westernas (Katie McGrath) – who seems to wish she was more; Lady Jayne (Victoria Smurfit) a noblewoman who is very much an aggressive squeezer of every last drop of life; several minor, but very wealthy and very snobbish nobles, and Grayson’s servant/confidante, Renfield (Nonso Anonzie) – a large black man whose intimidating appearance conceals a quick mind and a law degree. 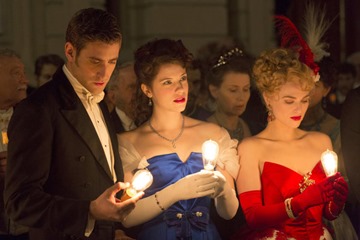 Various of the attendant nobles have been invited so Grayson can use his invention – demonstrated by providing power to light bulbs distributed throughout the crowd, without any wires – to undermine the source of their wealth: British Imperial Coolant, the company they own and through which they have invested heavily in oil. They, it turns out, are members of the Order of the Dragon – a religious organization that slew his family and turned him into a vampire – while leaving his humanity intact so that he would suffer for eternity. The Order also slew Van Helsing’s family – hence his allying with Grayson/Dracula.

Dracula boasts a stellar cast and an intriguing take on Stoker’s characters, bringing together the supernatural and science fiction in a way that feels and looks pretty seamless. The writing – by series creator Cole Haddon and Carnivale’s Daniel Knauf – is, unfortunately, pretty stolid but the performances are mostly very effective. The five episodes made available for review contain more than enough revelation and mayhem to generate interest – but not enough to delight.

In its fusion of gothic horror, science fiction and soap opera, Dracula doesn’t quite get that it should be just a tad bit more humorous; a wee bit less serious. What humor there is seems to be in the development of characters from the novel into something different – though, in some ways, those differences ultimately lead to a greater sadness (a prime example being Lucy) – or in its unexpected connections (Van Helsing turning out to be Mina’s professor at medical school, for example).

Overall, Dracula is okay, but gets a bit too florid at times and definitely takes itself too seriously. The result is a series that feels like it should be a good companion for NBC’s supernatural hit, Grimm, but doesn’t nearly match its sense of fun.

Photos by Nino Munoz and Jonathan Hession/Courtesy of NBC