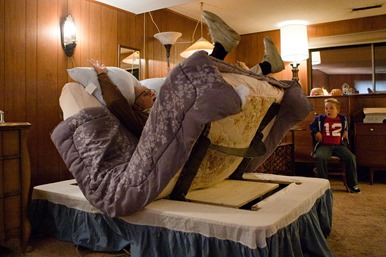 Bad Grandpa is better than I expected – which isn’t saying that much because my expectations were pretty low. Still, taking the Jackass brand of stupid human tricks (a title they probably didn’t use because David Letterman has likely copyrighted it) and host of non-stunt gags and framing them in a Candid Camera/Punk’d/road movie hybrid resulted in a few big laughs, a few chuckles and considerable eye-rolling on my part.

Johnny Knoxville makes a surprisingly good eighty-six-year old Irving and Jackson Nicholl is pretty good as Irving’s grandson, chubby sad sack, Billy. The road movie format allows the duo to pull gags ranging from G-rated (Billy asking a stranger to be his new dad) to R-rated (Irving’s encounter with a soda machine and his antics at a strip club on Ladies’ Night). The idea that Irving has to drive Billy to his father’s place because his mom’s gone to jail for drug-related reason is, basically, the entirety of the plot.

Some of the movie’s best moments occur as the closing credits roll. We get to see a few people’s reactions to the revelation that what they saw was actually staged, and some behind-the-scenes moments. One would expect/hope that there will be a lot more of these kinds of things on the future home video releases.

If you love Jackass, you’ll love Bad Grandpa. If you don’t love Jackass (like me), you may still find it a decent afternoon’s/evening’s entertainment.