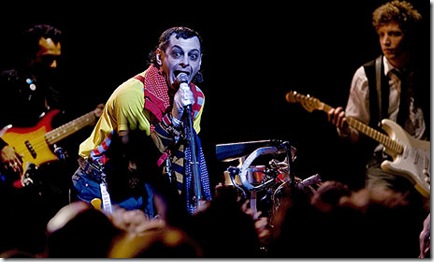 Sex & Drugs & Rock & Roll is three parts straight ahead biographical film to one part impressionistic bits – all dealing with the life of the late Ian Dury [Andy Serkis], rock & roll entertainer extraordinaire. It treats the life of this unique talent with precisely the kind irreverence he would have expected.

Ian Dury & The Blockheads are probably best known for the anthem that gives the film its name and an oddball melange of punk, rock and funk that was the band’s biggest hit in North America, Hit Me With Your Rhythm Stick. They were one of the first [and most brilliant] acts signed to Stiff Records – and one of the most flamboyant.

Sex & Drugs & Rock & Roll unfolds the story of Dury’s life in a way that folds flashbacks of his childhood with the ongoing story of his efforts to become a rock & roll entertainer [as he notes at one point in the film, he never thought of himself as a punk; only as an entertainer]. It’s a story that features a lot of familiar elements: hard childhood; starving artist moments; a long-suffering wife [Olivia Williams]; a long-suffering girlfriend [Naomie Harris] – even the rapid rise and equally rapid fall and effort at a comeback. Where Dury’s story verges from the norm is the point in his childhood when a holiday swim turns into polio and changes his life from typical to intense and painful.

The film opens with a whiteface character stepping onto a musty stage which, when he begins to sing, becomes a full house – and he is suddenly backed by a full band. This first impressionistic moment gives way to a group rehearsing in a small, probably stuffy room while a woman gives birth in the room below. The whiteface figure, and the bandleader in rehearsal, is Ian Dury; the woman giving birth, his wife Betty.

Over the course of the film we see the fiercely independent Dury struggling toward, and then with, success; juxtaposed with the trials if young Dury [Wesley Nelson], whose father [Ray Winstone] leaves him in a home for crippled children – and at the mercy of a sadistic orderly [Toby Jones].

From the Monty-Pythonesque opening credits to the final concert performance alongside the closing credits, Sex & Drugs & Rock & Roll has a crazy energy that sucks the audience into its embrace like a maelstrom. As we ping back and forth between adult Ian and young Ian, between straightforward storytelling and brilliantly realized impressionistic excursions into performance and the force of Dury’s personality, it becomes easy to see how the unique sound and persona of Ian Dury came to be.

In a way, the impressionistic scenes have the feel of the relentlessly aggressive sax solos that punctuated some of Dury’s best songs. Their freedom acts as a framing device for the more structured scenes depicting literal events from his life. Most poignantly, the film depicts his relationship with his son, Baxter [Bill Milner], a relationship that has unusual depth for a biopic.

One of my favorite sequences deals with Dury’s writing of Spasticus, Autisticus – a song written to display his utter contempt for the United Nations’ International Year of Disabled Persons, which he thought condescending and patronizing.

While the film is extremely good, it is elevated by the performances of several of Dury’s songs by Serkis, who is backed by the original Blockheads. They are performances that have the kind of conviction and power – and spirit of fun – that originated with Dury.

Sex & Drugs & Rock & Roll is a brilliant rock & roll biopic. It shines a light on a rare talent – a talent made sharper by a life far different than the usual. It is an experience made possible by a sharp script by Paul Viragh and direction by Matt Whitecross – both of whom must be rockers at heart.