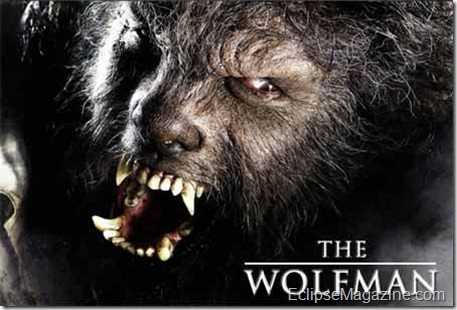 A few years ago I took one of those Who is your Celebrity Match quizzes and Benicio Del Toro came up as my match. I was like, hmmm… A tortured, pretentious artist is my match, I can see it but at least he looked good.  Now 10 years later Benicio has completely let himself go which is fine because in Wolfman he’s an Actor who returns home to find out what happened to his brother.  Wolfman is all about atmosphere and tone, which it gets mostly correct. Director Joe Johnston (Jurassic Park III, Hildago and the upcoming Captain America movie) does an interesting job of bringing that 60s horror vibe into the present. The movie looks just right, it’s dirty, muddy, dank, like an old style classic horror movie would look if it was shot today. The problem is the story is boring and the acting is just terrible, especially Anthony Hopkins as Lawrence’s father.  It took me 3 days to watch this disk because it kept putting me to sleep.

There’s not much to say on this front, the 1080p transfer is nice, sharp, clear. As mentioned earlier the cinematography on this is dirty and muddy so Blu-ray doesn’t enhance the overall look and feel that much. I just didn’t get a feeling that this is a movie that must be watched in Blu.

I love the extras on this disc. It includes a nice Picture In Picture mode that walks you through the making of the movie and includes an interactive timeline that gives you an in-depth look at the history of the Wolfman and information about the legend of the Wolfman. It also includes the ability to watch the original 1941 Wolfman Movia via BD-Live stream – how cool is that?  The disc includes both the Unrated and Theatrical version of the film (I don’t know what the difference is between the two cuts).  There are deleted scenes, an alternate ending, several extended featurettes about the production.  Universal’s  “MyScene” let’s you create bookmarks. The only thing that annoys me is, they have ads now for upcoming movies or dvds as part of the menu. I can a time when these ads turn into crap for things like coke products. 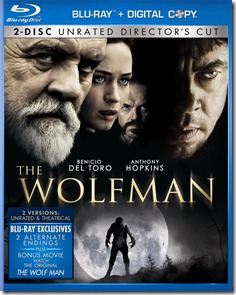 I do love Universal’s menu navigation system, it’s clean and easy to use. The packaging is standard two disc with a slip case cover. All of the features are on the main disc, so no swapping – I’m lazy so this is always appreciated.

While I didn’t like the movie, this is an excellent Blu-ray package with a nice set of extras and you really get 3 movies here – The Original 41 Version, Unrated Cut, and Theatrical version, how can a Wolfman fan scoff at that? Fans of the genre should get this set.