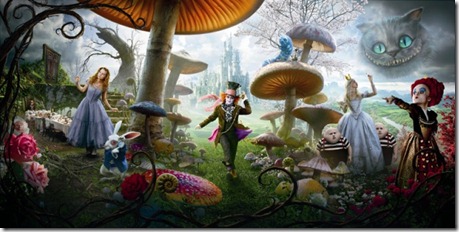 You have to hand to Disney; they really are treating this Blu-ray release like a million bucks. Almost every day last week they had arranged internet chats with several of the production folks involved (but hey, no Tim Burton or Danny Elfman?), provided a ton of clips and more. I actually got excited for this release again, that is until I remembered I didn’t really like the movie. I thought it was an ugly, blurry mess because of the 3D but after watching the Blu-ray last night, no, it’s just an ugly drab mess – period. I don’t understand how Tim Burton can get the cinematography and look so wrong on this. I said in my original review that Tim Burton was born to make this movie – 10 films ago, now it just feels like I’ve seen it all a million times before with more passion from the director. There’s not a single moment in this film where I felt like Burton “loved” this material. 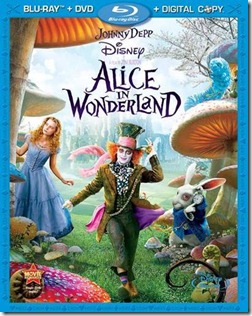 I really expected to love the Blu-ray experience, I mean I officially hate most 3D films so I thought watching this in the crispness of HD, without the distraction of 3D would enhance the experience and it doesn’t. It’s one of the worst looking films I’ve ever seen on ye old Blu-ray. The transfer is fine, but I don’t think there’s any amount of sharpness you can add that makes up for the dreariness of the production quality. Audio sounds great, but a boring soundtrack doesn’t help. Subtitles are available in Spanish and French.

This comes in Disney’s standard 3 Disc packaging (Blu-ray, DVD, and Digital Copy) with a slip case. I like the cover art – it’s actually vibrant and what Wonderland should look like, I don’t understand why the actual film doesn’t look as colorful. Menu navigation is easy, clean and straightforward to use.

Disney does add one unique unadvertised extra and that’s something called a Descriptive Audio Track. It’s very cool; it’s some woman that’s describing everything that’s happening on the screen. It’s as though you are listening to an audio book. I wish I could rip this track and put it on my iPod. I hope all future Disney productions include this; it adds a whole new dimension to the viewing experience.

Other than this new feature, the rest of the extras are an extensive set of featurettes that show you how the production was put together and cast interviews. Warner has Maximum Movie Mode and Universal has U-Control, Fox we just won’t mention them – we’re lucky if they give us one 4 minute featurette, Disney really needs to come up with their version of Picture In Picture. They generally do everything else right, but skimp on this one feature.

I wish I could rave about this disc, I always love and appreciate a great PR Campaign, and Disney Home Video rarely disappoints but this package sucks, not because of anything on this set, but because the movie is barely watchable (I turned it off 20 minutes into it) and no amount of shine is going to fix this simple fact. Wonderland should be this amazing, vibrant looking place – even if it’s under control of evil, there should be a sense of awe to the visuals instead everything just lays there looking dead and fake. There’s no life to anything on screen – even the actors. You should skip this movie altogether, it’s not worthy of a rental that alone a purchase.