A kid with an implausible dream, a neo-conservative Batman and Robin and a social network combine in unexpected ways to provide Kick-Ass [both the film and the character] with an eager-to-please rambunctiousness that makes it both infectious and scary. 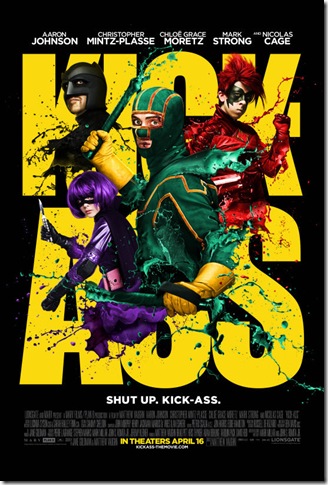 Dave Lizewski [Aaron Johnson] has always wondered why no one ever just put on a costume and gone out to fight crime. His friends ridicule him, but he buys himself a flashy lime green wetsuit and a couple of police batons and gives it a shot – with the expected results. He is beaten, stabbed and run over.

Meanwhile, a cheerful father [Nicholas Cage] is teaching his daughter [Chloe Grace Moretz] to take a shot – firing bullets into her Kevlar vest from point blank rage. Her reward for not whining? Bowling and ice cream. It’s just another loving father/daughter relationship…

Once Dave gets out of the hospital, against all odds [and showing an equal abundance of balls and lack of brains], he gets back on the streets and actually stops three thugs who are beating up another guy. A witness shoots him with a cell phone, puts the video online and a hero is born.

Partially based on Mark Millar’s graphic novel of the same name [Vaughn obtained the rights after seeing a pre-release copy of the first issue and the movie and graphic novel were then developed simultaneously – each contributing to the finished products], Matthew Vaughn’s film is an adrenaline rush from start to finish.

At once a look at the consequences that might befall someone who tried to be a superhero and a satirical poke in the eye for the genre, Kick-Ass is the kind of film that takes audiences to places they’ve never been before. Even the selection of songs for the film’s soundtrack have been carefully selected – note the placement of the Sparks classic, This Town Ain’t Big Enough for the Both of Us, or the way Hit Girl [see: loving father/daughter relationship] kicks much ass to the rollicking Banana Splits theme song. 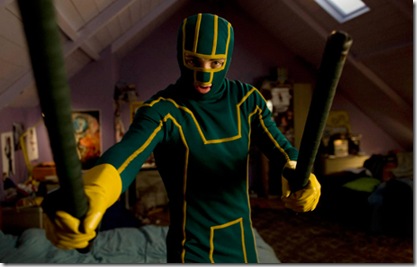 Naturally, it takes D’Amico’s comics-reading son, Chris [Christopher Mintz-Plasse] to come up with a plan to get these heroes off D’Amico’s back – creating a fake hero, Red Mist, who captures a mob underboss [actually a sacrificial lamb to let Chris draw out Kick-Ass and friends]. This also leads to one of the movie’s best film quotes – though it’s too important to the plot to relate here.

Kick-Ass is dizzying in both its approach to the action [each action sequence is stylistically, hugely and completely different] and its approach to its characters. The way Big Daddy and Hit girl are introduced, for example, leaves us with no doubt that the two are on a mission – as compared with Dave, whom we instantly realize has no business, whatsoever, trying to be a superhero.

While Johnson is super as Dave and Strong makes a slick enough villain, Cage [with his bang-on Adam West cadences when in costume] and Moretz [whose fierce physicality is matched by her complete belief in her father] are the real stars here. In Cage’s case, Big Daddy is just the latest in a string of brilliantly quirky [on different ways] roles he’s undertaken in the last few years. In Moretz’s case, Hit Girl is a role that requires such faith [however misguided] in her father, and such a willingness to be physical [she did most of her own stuntwork] that few adults could have pulled it off – let alone the eleven-year old girl she was when Kick-Ass was filmed. The two are, according to Millar, a neo-conservative Batman and Robin – they don’t hesitate to kill the bad guys!

The script, by Vaughn and his writing partner, Jane Goldman, differs from the graphic novel in several key ways, mostly in the third act. The changes are such that they make perfect sense for film and were approved by Millar. Vaughn’s direction is imaginative and fast-paced… almost, but not quite slipping into frenetic.

While the shock of a prepubescent girl using language that would shock a sailor might generate a lot of laughs, the biggest source of laughs comes from the execution of the premise in such a take-no-prisoners manner. Kick-Ass does, indeed, kick ass – with style and imagination.