Mike (Tatum) is working for himself now – making custom furniture – and having trouble staying afloat. A call from one of his buddies from his dancing days has him headed to what he thinks is a wake for Dallas (Matthew McConaughey, who is not in this movie) and discovers it’s a ruse to get the gang together for one last blowout performance at the 2015 Strippers Convention in Myrtle Beach.

Dallas, it seems, didn’t die but took off to Europe, leaving his troupe high and dry – so this last performance is their one chance to go out on their own terms. Cue road trip in a food truck (Artisanal Froyo!).

Mike, whose relationship died shortly after the first movie ended, meets photographer Zoe (Amber Heard) in the oddest meet cute I’ve seen in a while. When they have problems on the road, another stop takes them to a friend’s house – where they encounter Nancy (Andie McDowell) and some of her friends – who just welcome these strangers in and start in on the booze. So, there’s yer basic level of writing for the entirety of the movie. 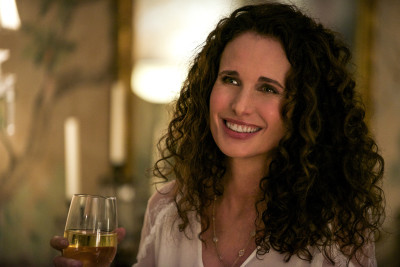 Another pit stop puts them together with an MC – Rome (Jada Pinkett-Smith) – to replace their regular guy, Tobias (Gabriel Iglesias), who was injured in the aforementioned problems on the road. Of course, she’s someone Mike knew long before even the first movie and that story is as boring as her new pleasure place is not.

Magic Mike XXL was directed by long-time Steven Soderbergh associate Gregory Jacobs and you can see it in the way he lets scenes develop in a steady frame – never using quick cuts to artificially ramp up pace (except, of course in the dancing – and even then, only as much as necessary). If Reid Carolin’s script was better, that wouldn’t be the problem that it is (hard to believe he write the first film).

The cinematography and editing are by Soderbergh under his Peter Andrews pseudonym and they are beautiful to behold, technically. Sadly, except for the dancing, the content does not match the level of quality of the technical – the cast does what it can with the script, and the production value is pretty terrific, but in between the dancing routines, only Pinkett-Smith and McDowell really manage to rise above the boredom.

If ever there was a poor sequel made because the original was an unexpected hit, it’s Magic Mike XXL. Again, outside the actual dancing, Magic Mike XXL is a waste of the cast’s amazing chemistry (I’d like to see this same exact cast in a smart heist flick – that could be amazing!).

Anyroad, the dancing makes Magic Mike XXL worth seeing. Is it enough to make the film worth seeing in a theater? Probably not.